India crushed South Africa by 203 runs on the fifth and final day of the first Test in Visakhapatnam to take 1-0 lead.

India crushed South Africa by 203 runs on the fifth and final day of the first Test in Visakhapatnam to take 1-0 lead in the three-match series. Chasing 395, South Africa were bowled out for 191 in 63.5 overs with Mohammed Shami taking 5/35 as he combined with Ravindra Jadeja (4/87) to rush through their batting line-up.

South Africa collapsed in quick time, a stark contrast to the resolve their batters showed in the first innings. Although, the pair of Dane Piedt and Senuran Muthusamy resisted putting up a clinic for their top-order. They added 91 runs to pull their team out from the depths of 70/8 when they lost seven wickets in the morning session itself.

The seeds of the collapse were set as early as the second over, Ravichandran Ashwin’s first of the day. He cleaned up Theunis de Bruyn (10) for his 350th Test wicket to become the joint-quickest to the landmark. Shami followed up with a wicket of his own in the following over leaving Temba Bavuma (0) on all fours, uprooting the stumps.

At 20/3, the tourists were on a shaky ground. Captain Faf du Plessis joined Aiden Markram to ride the nervy phase. Markram, a little adventurous, tried counterattacking. Slowly, the score moved forward with the pair adding 32 runs for the fourth wicket. And just then, Shami produced a moment of magic, an inswinger that left Du Plessis with a wry smile as it jagged back sharply, with the South African shouldering arms on 13. First innings centurion Quinton de Kock also registered a duck becoming Shami’s third victim as the tourists lost half their side for 60 in 23.1 overs.

Jadeja, whom Markram had hit for consecutive fours earlier, then took the centrestage with three wickets in an over. He first completed a stunning one-handed return catch to end Markram’s innings on 39 before trapping Vernon Philander (0) and Keshav Maharaj (0) to put India on the brink.

However, Piedt, who scored a maiden Test half-century, delayed the inevitable, pushing the contest into second session. They continued to frustrate India before Shami struck twice, first to break the defense of Piedt and then last-man Kagiso Rabada.

The second Test starts from October 10 in Pune. 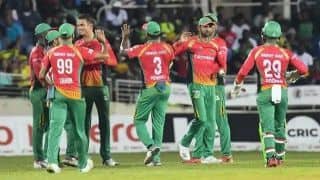