South Africa will be hoping to lift their morale following a disastrous outing at the World Cup.

After the series opener in Dharamsala was washed out without a ball being bowled, India and South Africa will look to capitalise on a batting paradise at the IS Bindra Stadium in Mohali when both sides square off in the second Twenty20 International on Wednesday.

Mohali has been known to be a high-scoring venue and with the weather expecting to be perfect for play, India will want to kick-start their long home season with a win thus carrying on from where they last left off against West Indies with only rain denying Virat Kohli and Co. a clean sweep of the Test, ODI and T20 series.

#TeamIndia opener @SDhawan25 sweating it out in the nets ahead of the 2nd T20I against South Africa.#INDvSA pic.twitter.com/ibvu9WXT9h

India have left out Jasprit Bumrah, Kuldeep Yadav and Yuzvendra Chahal for a second successive T20I assignment which offers more time to the likes of Rahul Chahar and Washington Sundar to enhance their reputation. Allrounders Ravindra Jadeja and Krunal Pandya are around too and they both possess the ability to chip in with valuable runs lower down which also may enhance their stakes in the pecking order.

In the pace department, Deepak Chahar, Khaleel Ahmed and Navdeep Saini, all of who impressed on the recent tour of West Indies, will be given more time to perform and possibly battle for the last pacer’s slot once Bumrah returns.

READ: ‘If Pant plays a bad shot, there will be a rap on his knuckles, talent or no talent‘

India’s batting will see the reunion of openers Rohit Sharma and Shikhar Dhawan, who had a poor tour of West Indies, scoring 1 (7), 23 (16) and 3 (5) in three T20I innings. India will hope Dhawan bounces back at home.

South Africa will be hoping to lift their morale following a disastrous outing at the World Cup. In the absence of regular captain Faf du Plessis, who has been rested for the series, Quinton de Kock will be leading the side.

The visitors have included quite a number of fresh faces in their squad in a bid to build a team for the 2020 T20 World Cup next year and, thus, the next two matches will be crucial for the young brigade to seal their spots. While the side does lack experience, they are expected to pose a greater challenge to India than the West Indies did last month.

ALSO READ: Saini has the hunger to bowl at 150 kmph: Klusener

The last time South Africa toured India for a T20I series, they prevailed 2-0. Only de Kock, David Miller and Kagiso Rabada have returned from that side, which gives a huge opportunity for players like Bjorn Fortuin, pacer Junior Dala and the lone spinner in Tabraiz Shamsi to shine.

Weather: Partly cloudy with a maximum high of 32 degrees Celsius

You can also follow LIVE streaming of the match on CricketCountry (India vs South Africa, 2nd T20I: Scorecard)

Rohit and Dhawan are set to open the batting for India. Captain Virat Kohli will occupy his comfortable No. 3 position. However, it’s left to be seen if India go ahead with KL Rahul, who was dropped from the Test squad, at No. 4, or leave him out and include the in-form Shreyas Iyer and Manish Pandey, who fared poorly in the T20Is versus West Indies. Hardik Pandya will make an easy return to the side.

It will be a new look South Africa side taking to the field. Rassie van der Dussen will partner his captain to open the innings while Kagiso Rabada will lead the pace attack with Dala and Anrich Nortje giving him company. Shamsi is expected to be the lone spinner in the side. There is also the left-arm pace option of Beuran Hendricks who is likely to be drafted into the XI considering his abilities at the death. 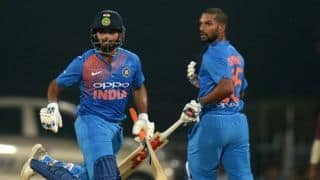