For the second time in as many matches, Indian skipper Virat Kohli enforced the follow-on on South Africa, after India bowlers bowled out the visitors for a paltry 162 in the second session of day three of the third Test at Ranchi on Monday.

Umesh Yadav returned 3/40 while Shahbaz Nadeem, Mohammad Shami and Ravindra Jadeja claimed two wickets each. For South Africa, Zubayr Hamza top-scored with 62 while George Linde put in a late resistance of 37 off 81 balls. At lunch South Africa were reduced to 129/7 and Linde, in association with Anrich Nortje added 32 runs for the ninth wicket to frustrate Indian bowlers.

But, Linde fell to Yadav, trying to push one on the off side and was caught at second slip by Rohit Sharma. Nortje was the last to depart, trapped in front by Nadeem after playing out 55 deliveries for four runs. Kohli enforced the follow on with South Africa trailing India by 335 runs.

Earlier in the day, in what was a promising start for South Africa – despite the loss of skipper faf du Plessis to a ripper of a delivery from Umesh Yadav – Hamza and Temba Bavuma provided the visitors some hope in the morning session. However, that hope was short-lived as after Hamza’s fluent maiden Test fifty, Jadeja picked two wickets, while left-arm spinner Nadeem claimed his maiden Test wicket to leave SA in tatters at lunch.

Starting at 9/2, SA lost du Plessis to a peach of delivery from Yadav that pitched on off and middle and swung just enough to leave du Plessis’defence and clip the edge of off stump. A flummoxed du Plessis stood his ground, appreciating Yadav’s delivery. At 16/3, SA faced an uphill task to steady the innings and Hamza, playing only his second Test, and Bavuma then added 91 runs for the fourth wicket.

Hamza started off in a shaky manner with the pacers – Shami and Yadav – finding the edge of his bat, but he survived the tough passage of play and grew in confidence to notch up his maiden Test fifty.

But, batting on 62, he was undone by a Jadeja delivery that skidded off the surface. Hamza went back and was beaten for pace as the ball thudded on to the stumps. The wicket was the reward of pressure put on by Jadeja and Nadeem. In the next over, Nadeem had his glory moment, drawing Bavuma forward with loop, but the delivery turned and moved away; Wriddhiman Saha did the rest behind the stumps.

Couple of overs later, Jadeja added his second with the one going away from debutant Heinrich Klassen as he departed for 6. South Africa slumped from 107/3 to 119/6. 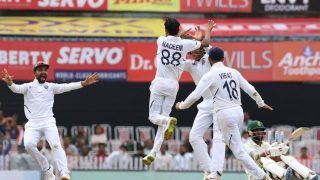 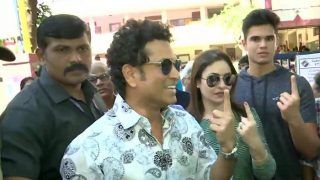