West Indies lost all three T20Is to India and now host them for three ODIs.

Jason Holder has called on West Indies‘ batsmen to convert any starts they make during the three-match ODI series versus India starting today in Guyana, as the hosts resume playing one-day cricket following their disappointing campaign at the ICC Cricket World Cup 2019.

After starting their World Cup with a seven-wicket win over Pakistan, West Indies blew a terrific chance to beat Australia and then, after a washout against South Africa, won just one more match in England to finish ninth out of ten teams.

The only other team they beat was Afghanistan, who finished last in the Word Cup.

Young Nicholas Pooran finished as West Indies’ leading run-getter of the tournament with 367 at an average of 52.42, having scored one century and two fifties. Only three other batsmen crossed 200 runs – Shai Hope with 274, Shimron Hetmyer with 257 and Chris Gayle with 242.

Hope, widely viewed as the best current West Indian batsman, scored three fifties with a best of 96. He was also dismissed for 77 and 68. Around those half-centuries, Hope had scores of 5, 5, 1, 11 and 11.

Carlos Brathwaite scored the other century from West Indies in the World Cup, but otherwise managed scores of 16, 14, 1, 8 and 14*.

Ahead of the first ODI against India on Thursday, Holder called on his team-mates for bigger scores.

“Too many instances where we have gotten starts as individuals but never carried them deep into the innings, so that’s one area we have pinpointed and once we’ve tackled that we have put ourselves in our very good position,” he said.

(READ: Virat Kohli expects tougher ODI series but ‘will try to have fun’)

Holder also asked for discipline from the bowlers against India’s batsmen.

“For me it’s just a matter of remaining disciplined with the new ball, taking new-ball wickets and focus on their middle order and take the game from there,” he said.

Virat Kohli‘s team completed a 3-0 sweep of West Indies in Guyana on Tuesday to continue their strong form on tour. Having taken an unassailable 2-0 lead in the three-match T20I series versus over the weekend in Florida, India landed at Providence and beat West Indies by seven wickets in the final T20I. 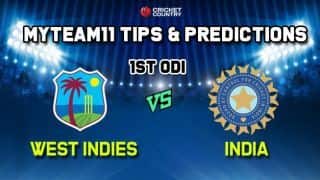