Skipper Virat Kohli and deputy Ajinkya Rahane were batting on 14 and 5 respectively as India extended their lead to 173.

India lost both their openers Mayank Agarwal and KL Rahul and Cheteshwar Pujara but managed to extend their lead to 173 at tea on day three of the first Test against West Indies at the Sir Vivian Richards Stadium, North Sound in Antigua on Saturday.

Skipper Virat Kohli and deputy Ajinkya Rahane were batting on 14 and 5 respectively before the second session came to an end.

Pujara was the next man to get out as Kemar Roach let one sneak through Pujara s bat and pad to disturb the timer. Having picked up four wickets in the first innings, this was Roach s fifth wicket in the series opener.

Earlier, India bowled out West Indies for 222, securing a 75-run lead in the first innings. West Indies resumed the day on the overnight score of 189/8. 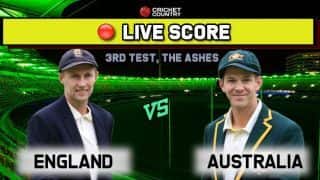