India were 134/4 as early tea was taken with Ajinkya Rahane batting on 50 and Hanuma Vihari unbeaten on 18.

KL Rahul did the hardwork but threw away an opportunity to score big but Ajinkya Rahane brought up his 18th half-century as India reached 134/4 before rain forced early tea interval on day one of the first Test against West Indies at the Sir Vivian Richards Stadium, North Sound in Antigua on Thursday. The Indian vice-captain was batting on 50 while Hanuma Vihari was unbeaten on 18.

Rahul played some pretty shots and was also hit a number of times by the West Indian pacers. However, it was an innocuous Roston Chase, drifting down the leg, that did Rahul in as he got out for 44.

India were reduced to 25/3 after Kemar Roach and Shannon Gabriel ran through the top order. But Rahul and Rahane added 67 runs together before the former got out.

Rahane had his share of luck as he got two reprieves in the 40th over, bowled by Chase. First, Miguel Cummins could not hold on to a running catch and then, Shai Hope failed to take a sharp catch down the leg-side.

Earlier, electing to bowl after a delayed start due to the wet outfield, West Indies set the ball rolling as Roach tested both Indian openers Mayank Agarwal and Rahul. While Rahul managed to stay put, Roach s burst saw Agarwal and Cheteshwar Pujara back in the dressing room in the same over.

Agarwal perished for five as West Indies opted for a review to overturn the on-field decision. Pujara was the next man to get out as he pushed at an away-going delivery and Shai Hope took his second catch of the match.

However, it was Gabriel, who scalped the big wicket as he dismissed Virat Kohli in the eighth over to give the home team their third breakthrough of the morning. The West Indian pacer set Kohli up, bowling two sharp bouncers. While the Indian skipper managed to tackle them, he threw his hands at a wide delivery that followed the bouncers and perished as Shamarh Brooks, making his debut, took the catch. 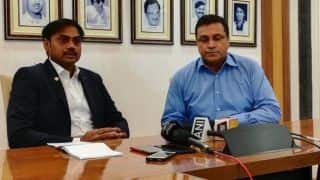 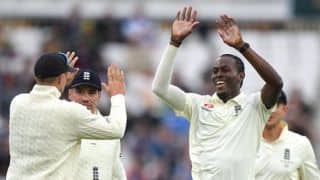