Dinesh Karthik, who was in the India's World Cup 2019 squad, was dropped while Jasprit Bumrah was rested for the ODI and T20Is.

Navdeep Saini was picked in India’s ODI and T20I squad for the West Indies series while Manish Pandey and Shreyas Iyer returned to the Indian squad as the MSK Prasad-led selection committee on Sunday announced ODI, T20Is and Test squads for India‘s upcoming tour of the West Indies that gets underway from August 3.

Shikhar Dhawan, who was ruled out of the World Cup after sustaining a finger injury against Australia, returned to the squad while young leg-spinner Rahul Chahar earned his maiden India call-up as he was picked in the T20I squad.

Dinesh Karthik, who was in India’s World Cup 2019 squad, was dropped while Hardik Pandya, Prithvi Shaw and Jasprit Bumrah were not picked as they were unavailable. Bumrah, who is not a part of the ODI and T20I squads, is picked for the two-match Test series in Caribbean.

Shubman Gill, meanwhile, was not picked as MSK Prasad said, “Shubman Gill is in the waiting list now since KL Rahul is back, he’ll be considered in future.”

The chairman of selectors made it clear that Rishabh Pant will play in all three formats before shading light on MS Dhoni’s unavailability.

“MS Dhoni is not available. He expressed his unavailability. Post the World Cup we have a roadmap. For now, it is to give Rishabh Pant opportunities. We have discussed it with Dhoni,” said Prasad.

“Rishabh Pant hasn’t done anything wrong to be not included in the Playing XI. Rishabh Pant is going to play all three formats. So we’ll have to manage his workload. So, Wriddhiman Saha and KS Bharat come into the picture,” added Prasad.

There was much debate and speculations surrounding whether veteran MS Dhoni will be included among the touring party. However, the confusion ended on Saturday when news emerged that the former India captain will be taking a two-month sabbatical to join his army regiment.

The selection meeting was originally to be held on Friday but was postponed by two days following a rule change by the Committee of Administrators (CoA) that brought in complications.

CoA changed the age-old practice of BCCI secretary convening the selection meetings. It passed a directive that such meetings will now be convened by the chairman of selectors and neither BCCI secretary nor its CEO will be among the attendees. 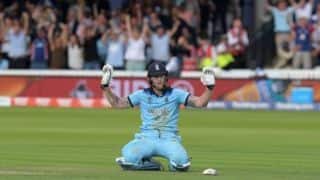