The series is led by India, 1-0, and they will like to seal the fate of the series before heading to Port-of-Spain whereas West Indies will like to draw another Test unless they decide to go after the total set by India.

The third Test between India and West Indies is heading for a fitting finale on Day Five after Bhuvneshwar Kumar’s five-for on Day Four wrecked havoc on the West Indies batting line-up to hand over an advantage to the visitors. After one whole day was washed out due to rain, chances of a result seemed bleak but an excellent show of swing bowling bowling by Bhuvneshwar, followed by Ajinkya Rahane’s fifty has put India right on top for another series win under Virat Kohli’s leadership. India lead by 285 runs at the close of play and would like to add some more to their total before asking the hosts to bat. Full Cricket Scorecard: India vs West Indies, 3rd Test match

West Indies had done their homework in the lead up to this match as they competed well against India and even had them on the mat on most occasions during the first two days. At stumps on Day Two, West Indies were trailing India by 246 runs and hand nine wickets in hand. Day Three was for them to get a hold of things, score big and impose more pressure on the Indians. However, after Day Three was abandoned due to rain, the match seemed like heading into a draw. The home team resumed their innings from 107-1 on Day Four. They lost both their set batsmen, Kraigg Brathwaite and Darren Bravo, in quick succession. Full cricket updates: India vs West Indies, 3rd Test, Day 4

Marlon Samuels and Jermaine Blackwood came to their side’s rescue till lunch but a slew of wickets fell in the second session to put them on the back foot. Kohli then introduced Bhuvneshwar from one end and he bowled with a lot of heart and purpose. He outsmarted the batsmen with his inswinging deliveries and his outswingers as well to keep them confused. He for most times though, stuck to the basics. The ball to dismiss Samuels was the highlight of Day Four, which not only opened the floodgates for the visitors but also instilled a lot of confidence on the comeback man. He removed Shane Dowrich, Blackwood and Alzarri Joseph to dismiss the home team and hand a lead of over 100 runs to his side. He eventually ended with 5 for 33.

India felt they certainly had a chance to win the match now and seal the series as they came to bat with a plan of settling in and scoring at a brisk rate. They lost wickets after a 50-run stand between the openers. But a late fightback by Rahane and Rohit Sharma has put them on path of a victory perhaps. India might look to bat for another 10-15 overs and add around 70-odd runs to give a target of over 350 to the hosts on the fifth, decisive day. They are well aware of the power hitters in the opposition but their inconsistencies and fragility have also been exposed by Team India. ALSO READ: India vs West Indies, 3rd Test, Day 4, Highlights: Bhuvneshwar Kumar’s 5-for brings visitors closer to series win

The bowlers will be confident of pulling out a win this time around, as the collapse of the home team in their first innings has exposed their shortcomings. The proceedings on Day Four have brought life to an encounter heading which looked like it was heading for a draw. On the other hand, West Indies would be deeply dejected after their middle-order threw all the advantage and hard work done by them in the first two days but should try & take a leaf from the last Test match where they played bravely to sneak through a triumph-like draw. ALSO READ: Day 4 Report: Ajinkya Rahane’s unbeaten fifty takes India’s lead to 285 against West Indies in 3rd Test

The series is led by India, 1-0, and they will like to seal the fate of the series before heading to Port-of-Spain whereas West Indies will like to draw another Test unless they decide to go after the total set by India. They need a win much more than India, since they are trailing 0-1, and after all the efforts put by them on Day One and Two, their sudden surrender is disheartening. 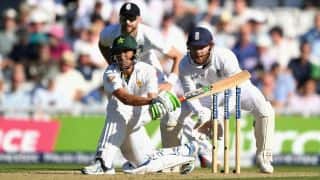