It has been reported that Dhoni will no longer be picked as India's first-choice wicketkeeper.

Two days before the BCCI selection committee meets to pick the Indian cricket squad to tour the West Indies, it has emerged that MS Dhoni may not be part of the tour.

According to a report in the Times of India, Dhoni has made himself unavailable for the three ODIs and three T20Is in what is being viewed as a transitional phase. It was speculated that Dhoni had played his final match for India after the team was defeated by New Zealand in the ICC Cricket World Cup 2019 semi-final at Old Trafford, and now it has been reported that he will henceforth not be picked as the specialist wicketkeeper.

Instead, it is surmised, Rishabh Pant will be groomed by Dhoni himself to take over as first-choice wicketkeeper.

“MS will not go to the West Indies,” TOI quoted a BCCI source as saying. “Going forward, he will not travel with the team within India or overseas as the first-choice wicketkeeper. Rishabh Pant will take over and there will be a grooming window for him until he settled down. During this time, MS will help in the transition. For all you now, he could be part of the 15 but not part of the 11. This team needs a guiding hand on multiple fronts and wishing MS away is clearly unhealthy.”

While he has been India’s first pick as Test wicketkeeper since the tour of England in 2018, Pant has kept wickets in two of his nine ODIs and in three of 15 T20Is. Dhoni did the job in each of India’s World Cup matches, but speculation of his impending retirement grew after he struggled in patches to dominate with the bat in England.

However, TOI quoted a source as saying that Dhoni will retire on his own terms: “He’s already proved himself to the kind of guy who preferred ‘why’ more than ‘when’ where his career graph is concerned. He’ll go, but what’s the hurry?”

India’s series with West Indies starts with the two T20Is in Florida on August 3 and 4 and then moves to the Caribbean for the final T20I on August 6, followed by ODIs on August 8, 11 and 14.

Then the teams play two Test matches, from August 22 at North Sound and August 30 in Jamaica. 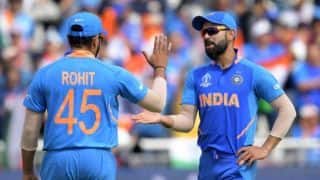