"India will be at home when they face New Zealand and England and will be tough to beat," Glenn McGrath.

When Anil Kumble was appointed as India’s head coach, Australia’s pacer Glenn McGrath backed his appointment and mentioned Kumble was a fighter. With too many Tests lined up for India, Kumble could be the answer for his side, is what McGrath believes. But look like he is unhappy with Australia’s performance against Sri Lanka, after the hosts historic victory after 17 years over Australia. He is also unhappy with India’s captain Virat Kohli aggressive approach in the ongoing Test series against West Indies. McGrath, the director of coaching at MRF Pace Foundation in Chennai, spoke about Australia’s woes, Kohli’s aggression, pink ball cricket and more. Full Cricket Scorecard: India vs West Indies, 3rd Test match

Speaking to Times of India, McGrath expressed his unhappiness on Australia’s indecisiveness saying, “It has always been an interesting challenge for us to perform on turners. It’s not that we can’t play spin. I think a lot has to do with the mindset. I think our boys are unsure of what they want to do when they are facing spinners. It’s this indecisiveness – whether to play aggressively or defensively – which is causing the problems.” The common question doing rounds is how Kohli and co. are going to tackle the real challenges against big Test teams like Australia, New Zealand and Australia.

McGrath felt that true challenges for young Indian team lies ahead, “The West Indies are not the Test team they used to be. India have played well and will take confidence from the victory. But then, winning the Test series against Windies is probably not a true indication of how good this Indian Test team is. They will be at home when they face New Zealand and England and will be tough to beat.” ALSO READ: IND thrash WI by 237 runs in 3rd Test: Twitter reactions

McGrath made a very comment speaking on Kohli’s aggressive spirit and said, “You need fighting spirit and controlled aggression to be successful. I don’t think Virat has had the best series against West Indies. He hasn’t scored as many runs as we would have wanted him to score. But he is a quality player. Kumble has years of experience and is respected widely. Both of them have started out in their respective jobs and have a lot of energy and the right attitude. So things are looking good for Indian cricket.” 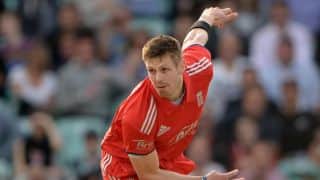