England women s left-arm spinner Sophie Ecclestone has been ruled out of the remainder of the India tour due to a broken hand. India women have already pocketed the ODI series on Monday with one match to go on February 28 at the Wankhede Stadium in Mumbai. (ALSO READ: Shikha Pandey credits India women’s coach WV Raman for improving technical issues)

Ecclestone, who sustained the injury during a warm-up session just before the second ODI, will also miss the following tour of Sri Lanka (three ODIs and three T20Is) from March 16.

Meanwhile, after the ODI series against India, England will be engaged in a three-match Twety20 Internationals which begins on March 4 in Guwahati. (ALSO READ: Smriti Mandhana to lead India in T20Is against England)

England may name a replacement for Ecclestone for the T20I series. They already have another left-arm spinner Linsey Smith in the squad, but will hope Laura Marsh, who missed the India tour due to a die strain, will return. 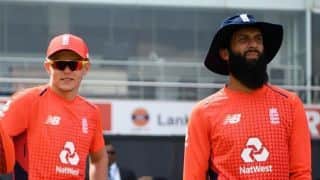