Indian spy and intelligence agency, RAW, had made attempts to ensure that the Zimbabwe cricket team did not tour Pakistan.

Karachi: The Home Minister of Punjab province in Pakistan, Shuja Khanzada, today alleged that the Indian spy and intelligence agency, RAW, had made attempts to ensure that the Zimbabwe cricket team did not tour the country in May He claimed in the Punjab Assembly in Lahore that the Indian agency had attempted to sabotage the Zimbabwe cricket team’s tour, which concluded successfully in late May, marking the first visit by a Test team to Pakistan in six years’ time.

Khanzada alleged that RAW officials had sent a text to the Zimbabwe team manager when the squad landed in Dubai with threats that if their players went to Lahore, none of them would go back alive. “We came to know about this when the team manager forwarded that message to us and we sent it to our security agencies. When they investigated the origin of the message it belonged to a RAW official,” the home minister claimed. Read: Zimbabwe tour of Pakistan will encourage other teams: SLC chief

Zimbabwe played two T20 matches and three One-day Internationals at the Gaddafi stadium in Lahore with all the games drawing capacity crowd. The visiting team was given unprecedented security throughout the tour. Even an incident during the second One-day International, when a suicide bomber allegedly blew himself up after he failed to penetrate the security ring around the Gaddafi stadium, didn’t derail the tour. Read: Pakistan vs Zimbabwe 2015: Blast near Gaddafi Stadium injures four

Khanzada also alleged that the suicide blast was an attempt by RAW to sabotage the event. “We foiled RAW’s attempt to abandon Pakistan, Zimbabwe cricket series,” he claimed. No Test team had toured Pakistan since March, 2009 when militants attacked the Sri Lankan team in Lahore, killing six Pakistani policemen and a van driver and injuring some of the visiting players.

Zimbabwe agreed to undertake the tour in May after the PCB gave them financial incentives, including USD 12,000 to each player, although the chairman of the board Shahayrar Khan rubbished media reports that it was a bribe to the Zimbabwe cricket board to undertake the tour. Read:Shahryar Khan refutes claim of bribing Zimbabwe players to tour Pakistan 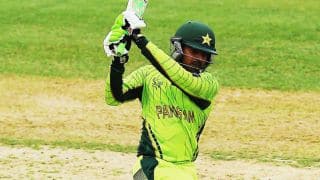 Haris Sohail injures shoulder, might be recalled to Pakistan