Weittimuny was the only head of a cricket board apart from Zimbabwe to accept the PCB' s invitation to visit Lahore during the series.

Karachi: Sri Lanka Cricket‘s interim head and former Test opener Sidath Wettimuny is hopeful the Zimbabwe‘s successful tour of Pakistan will help convince other international teams to play in the country. “I am happy to see international cricket being played in Pakistan and I am hopeful it will help change perception about the security situation and the security plan of the PCB [Pakistan Cricket Broad] to the rest of the boards,” Wettimuny said. READ: Congratulations, Pakistan! Hope the Zimbabwe series is start of a new chapter

He said that the most significant aspect of the Zimbabwe tour was that the PCB and the Pakistan government had shown the will and capability of providing the best security to touring sides to make their visit a safe and successful one. Weittimuny was the only head of a cricket board apart from Zimbabwe to accept the PCB’ s invitation to visit Lahore during the series. READ: How much the cricket world has changed since Pakistan last staged an international game

Much to the disappointment of the PCB the ICC Chief Executive Dave Richardson nor any representative of the Indian board decided to visit Lahore to review the security arrangements for themselves. “I am just amazed at the response of the Pakistani people to this series and their enthusiasm has convinced me that Sri Lanka has to give more support to Pakistan cricket,” Wettimuny said. READ: International cricket resumes in Pakistan: A plea to fans

Pakistan is already working on convincing the Sri Lankans to send their team next year for a tour to Pakistan but Wettimuny sounded caution and said it would be premature to comment with finality on the proposal. “It would be premature to say anything but I have come to Lahore with my committee member as a sign of support and goodwill for Pakistan cricket,” he added.

“We have always been very supportive of Pakistan cricket. I’ll go back and tell our board what I’ve seen and then we can take it from there. We need to talk to all our stakeholders including players because they matter a lot, and they need to feel comfortable with a tour,” he said. 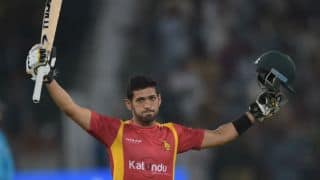