Kolkata: Injured Bengal cricketer Rahul Ghosh‘s mother said on Tuesday she had asked her son to “field carefully” while playing following the tragic death of former Bengal Under-19 captain Ankit Keshri on Monday. Ghosh was hospitalised here with a head injury sustained while fielding during a local league game on Tuesday.

“I had asked him to field carefully”, an inconsolable Sharmila Ghosh said. Rahul, nearing 20 years of age, picked up the injury a day after the death of Keshri due to a fielding collision. The injured cricketer’s father, Amitava, said he was “conscious” post being admitted to a private hospital here and was undergoing a series of tests to ascertain the extent of his injury on the left side of the head.

The picture at the hospital entrance was gloomy as his tense parents and concerned family members waited agonisingly for more updates. “I didn’t have a good feeling about his going out to play today. I called him up before the match and told him to field carefully. Why did he go to play today despite what happened to the other cricketer yesterday,” questioned Ghosh’s mother. An attending doctor said he is in a “stable” condition but the words hardly offered any relief to the family, particularly in the wake of Keshri’s death. Ankit Keshri, Bengal Under-23 cricketer dies after sustaining on-field injury

Keshri, a former Bengal Under-19 cricket captain, died at the same private city hospital on Monday following the head injury he picked up in a collision with a fellow fielder Sourav Mondal while taking a catch during a local knockout tournament Friday last. His tragic fate invoked the memories of the unfortunate death of Australian cricketer Phillip Hughes who was fatally hit by a bouncer during a domestic match on November 25 last year, and died from the injuries two days later. READ: Ankit Keshri was a talented cricketer and in the scheme of things: Bengal Chief Selector Raju Mukherjee 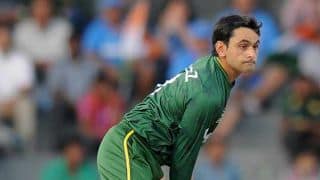