Gautam Gambhir said that if KKR put up good totals, their bowlers can win them most matches.

Kolkata Knight Riders (KKR) captain Gautam Gambhir was confidence personified and said his team will end up “winning most times” if it puts up a big score, which can complement the bowling attack it possesses. The Indian Premier League (IPL)  2014 kicked off in Abu Dhabi on Wednesday with an emphatic 41-run win for KKR over Mumbai Indians (MI), as Jacques Kallis set the tone with a 46-ball 72 before Sunil Narine completed the task with four wickets.

“We’ve got a very good bowling attack and if we put runs on the board most of the times we’ll end up winning,” a confident Gambhir said at the post-match presentation ceremony.

“A quality batter like Kallis knows when to accelerate and if either me or him stays till the 15th over we’ll get a good score. We have Morne Morkel‘s pace and Narine and Piyush Chawla in the spin department and Vinay Kumar is pretty good at the death as well,” he added.

Man of the Match Kallis, who has retired from Test cricket, said it was nice to come back after a break.

“Had a good few months off. It’s nice to catch up with friends and family, but I worked hard on my cricket to help Kolkata this season.

“There was more bounce this season which suited. Kept the good balls out at the start and cashed it in the death,” Kallis said.

The South African veteran was full of praise for Morkel and Narine.

“Morne started great at the start with the ball and Narine was brilliant as well. I probably haven’t got too many years left and I’m just looking forward to having some fun in the middle.”

Though the first phase of the tournament has moved out of India, a large crowd trooped in to cheer the two teams. 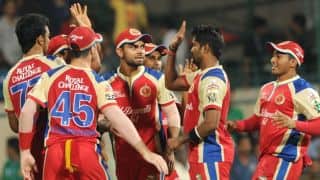