IPL 2014: MI look to build on winning momentum against CSK

IPL 2014: MI look to build on winning momentum against CSK

Mumbai have won back-to-back matches getting their tournament back on track.

The two arch-rivals are poised to go toe-to-toe in front of a packed crowd in the night game that is more crucial for the hosts and Champions League holders than their southern rivals who are sitting pretty at no. 2 on the points table with six wins from eight games.

Mumbai’s comprehensive back-to-back victories over table toppers Kings XI Punjab (KXIP) on May 3, followed by another well-merited one against Royal Challengers Bangalore (RCB) on May 6 in their well-fortified home venue has brought them right back into the race for the four play-off berths.

However, a first defeat in 11 games at this venue since tasting defeat in 2012 would virtually derail Mumbai’s quest for clinching back-to-back IPL crowns and emulating Chennai’s feat in 2010 and ’11.

Mumbai would be eager to carry their winning momentum against the formidable Super Kings whose morale, especially its bowlers, could be down after the 44-run thrashing they got from Punjab on May 7.

Sharma, who made a superb 59 not out, and Pollard (43) put on a near century partnership for the fifth wicket against Bangalore in Mumbai’s previous game which helped the home team post their highest total of 187 this season.

Both these batsmen revel at Wankhede where the ball comes on to the bat nicely and are expected to be the main hurdles for Chennai’s varied bowling attack.

Other Mumbai batsmen like Ambati Rayudu and Corey Anderson have made starts without launching into the big league, while new look opener CM Gautam has surprised the public with his big hits.

Chennai batsmen too, especially the successful opening combination of Brendon McCullum and Dwayne Smith, apart from Suresh Raina (212 runs from 8 games) and Mahendra Singh Dhoni (147), would also relish the surface which is good for stroke play.

West Indian Smith is pretty much used to the Wankhede track having played for Mumbai before shifting base and is the leading run getter (339) for his team along with New Zealand captain McCullum (314).

Both teams have a well balanced attack with Lasith Malinga (9 wickets) for Mumbai and Mohit Sharma (14) for Chennai being the most successful medium pace bowlers.

The hosts have beefed up their pace attack, which has been hit heavy by the injury to Zaheer Khan, by including UP swing bowler Praveen Kumar after Pawan Suyal proved very expensive against RCB.

If Mumbai have the fighting Harbhajan Singh (6 wickets) to bank upon for applying the brakes in the middle overs, Chennai have their spin twins — Ravindra Jadeja (11) and Ravichandran Ashwin (7) — to do this job.

Chennai, however, seems to be missing their top all-rounder Dwayne Bravo who was ruled out of the season after getting injured in their first game. Dew fall could be a factor for the team bowling second.

Mumbai had the upper hand over their rivals last year by winning three out of their four clashes of the season, their lone defeat coming in the first qualifier at Delhi which they avenged in the all-important final in Kolkata and became champions. 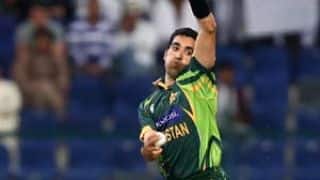 Sarfraz Nawaz: Umar Gul does not have the stamina for all three formats