He also said it wouldn't be right to make drastic changes despite a heavy defeat they suffered.

New Delhi: The costliest buy this season, Yuvraj Singh has not set the IPL ablaze the way he was expected to but his Delhi Daredevils (DD) captain JP Duminy has backed the star player to come good in the later stages of the T20 league.

Yuvraj, bought for Rs 16 crore, has scored 124 runs in seven innings at an average of 17.71 with just one half century to his name. The costliest player in the IPL managed 2 runs off 5 balls in Delhi’s demoralising 10-wicket defeat to Royal Challengers Bangalore (RCB) here last night. IPL 2015 schedule: IPL 8 match time table with venue details

Duminy feels it is not fair to single out a player in the team’s inconsistent run, which has seen them lose four out of their seven games.

“It is easy to criticise him. He has not had great opportunities in the matches we have done well and I think he will be the first to admit that he would have loved to contribute but it is not because of one guy’s performance that we are losing.

“He is a massive player for us and I have all the confidence that he is going to come good for us in the later parts of the tournament,” said the South African, who has been in decent touch, scoring 222 runs at 44.

While Yuvraj is yet to fire, another senior player Zaheer Khan is yet to take the field for Daredevils amid rising speculation over the fast bowler’s fitness. Duminy said he would be available for the May 1 game against Kings XI Punjab (KXIP).

“I think he [Zaheer] is about 95 percent fit to be honest. My thinking is, he will be up for selection for the game on the first. His progress has been good, he has been very determined to comeback and represent Delhi,” said Duminy.

He also said it wouldn’t be right to make drastic changes despite a heavy defeat they suffered.

“We have been inconsistent in both batting and bowling department and as I said earlier, we need to take a lot of lessons out of today’s game, take a hard look at ourselves. It is not about pointing fingers. Each of us could have done 10 percent better. Plus, we should not take the credit away from RCB, the way they came out and bowled.

“We got a few days off now and there is time to figure out what is the best combination for us. We need to explore some options and see whether we need to make changes. I wouldn’t think we will make drastic changes. We have been inconsistent, though there has been really good stuff from us as a team. We got one more game left here at the Kotla so we need to come back firing,” said Duminy. Indian Premier League (IPL) 2015: Complete coverage 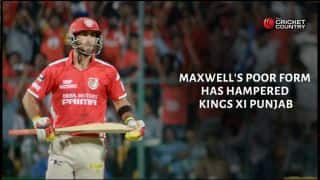