In their last outing at Kolkata, SRH were thrashed by KKR and the visitors will also be keen to settle scores.

Kolkata: Kolkata Knight Riders (KKR) will have the psychological edge over Sunrisers Hyderabad (SRH) but the defending champions will be wary of the visiting side’s resurgence when they clash in the Indian Premier League (IPL) 2015 match at Eden Gardens, Kolkata on Monday.

Posting three wins in four games, including one against KKR in a rain-marred encounter in the first leg, the Orange Army have jumped to fifth behind the Purple Brigade with one match in hand. Kolkata Knight Riders vs Sunrisers Hyderabad, IPL 2015, Match 38 in Kolkata: Preview

It’s been a mixed bag for KKR, on the other hand, as they are still striving to be consistent in the backdrop of a controversy surrounding Sunil Narine‘s bowling action as they have slipped to fourth place.

Both the teams land in Kolkata having played on Saturday. While KKR lost in Bangalore defending 112 from 10 overs in a last over finish, SRH handed Chennai Super Kings (CSK) a second successive thrashing in their first match in Hyderabad this season. David Warner blitz, bowlers earn SRH a crucial win against CSK

When they take the field, KKR having defeated them thrice in five meetings but on form the Hyderabad outfit will be ahead. On the field, it will boil down to a battle between their batting firepower led by David Warner against the KKR bowlers, especially the slower ones who would look to revel in home conditions. Andre Russell powers KKR to 111/4 against RCB in IPL 2015 Match 33

Much of their success is attributed to David Warner who has led from the front after being named skipper ahead of the season. The explosive opener has been in sublime form with five half-centuries in eight matches, and four of them in winning causes as he boasts of the maximum 50s (21) in IPL.

Warner’s 91 from 64 balls in their first leg fixture had given SRH a 16-run victory in the first leg and KKR can consider half the battle won if they get the left-hander cheaply. To address the threat, KKR may bring in ace South African speedster Morne Morkel who has had some success against the Aussie.  IPL 2015 Highest wicket-taker: List of best bowlers in IPL 8

The South African has dismissed the opener six times in International cricket and twice in the IPL, including in the first leg, and it would be interesting to see whether Gambhir brings in Morkel who has not played the last three matches.

Having returned to winning ways after securing a handsome win over CSK here, KKR have hit the slump once again going down to RCB for their fourth loss. Sarfaraz Khan, Shreyas Iyer, Deepak Hooda show the future of Indian cricket is in good hands

KKR are slated to play three matches at home beginning with SRH on Monday before they conclude with two away games and it’s imperative for Gambhir’s men to make the three count in order to make the playoffs.

In their last outing at Kolkata, SRH were thrashed by KKR and the visitors will also be keen to settle scores. On current form, SRH look fresh after notching the highest total of this IPL — 192 for the loss of seven wickets against CSK on Saturday night.

The inclusion of Moises Henriques and Eoin Morgan has been good for the team and their formidable batting will be their main strength.

SRH have also found the right mix of Indian players with the likes of Ashish Reddy and Naman Ojha doing their jobs impressively.

However, it’s their spin bowling resources which may be a cause for concern as their main tweaker Karn Sharma will have to bring out his best, while it remains to be seen whether they will bring in Pervez Rasool who has just played one match this season. 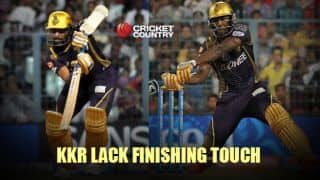 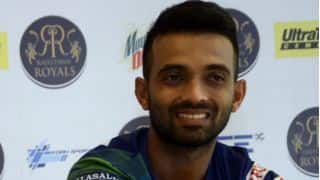