A Rajasthan Royals player had come forward admitting he was approached by a bookie.

New Delhi: Stung by revelations of a player being approached for spot-fixing, Indian Premier League (IPL) Chairman Rajeev Shukla today said that stringent measures will be put in place to ensure that the mega-event passes off corruption-free. Talking to PTI, Shukla said the approach made to a Mumbai-based player of Rajasthan Royals is being investigated and all teams have a designated Anti-Corruption and Security Unit (ACSU) officer with them to deal with such situations. READ: Rajasthan Royals player offered money to fix IPL 2015 match; informs BCCI

“The anti-corruption and security unit of Board of Control for Cricket in India (BCCI) is taking this incident as a success of their policy to create awareness among the players. The players have been educated that whenever anybody approaches them with wrong intentions, they should immediately inform the anti-corruption authority,” Shukla said. IPL 2015: RR commends player for reporting match-fixing request to anti-corruption unit

“In this case also, the player immediately informed the ACSU officer, who took the required action immediately. The matter is now being investigated and all possible steps will be taken to ensure a clean IPL,” he asserted. IPL 2015: Kolkata restaurants cash in on league with special offers

Refusing to divulge the identity of the player in question, Shukla said no stone will be left unturned to weed out corrupt practices, if any.

“Since ACSU does not share the details with the IPL Governing Council and they function separately, details about the players and suspected persons cannot be disclosed to the media. I can only say that zero tolerance policy towards corrupt practices at the tournament will be adopted and stringent action would be taken whenever required,” he said. Kolkata Knight Riders (KKR) vs Royal Challengers Bangalore (RCB) IPL 2015 Match 5 at Kolkata Preview

He called on the players and team officials to be alert and report any suspicious approach or activity. “I will appeal to players and all other people involved in the tournament, including the franchises, that whenever anybody approaches them, they should immediately inform the ACSU officials,” he said. Richie Benaud passes away: Cricket mourns the death of one of its most beloved sons, says ICC

“In this season, the BCCI has already deployed ACSU officials with each team to keep an eye on all activities and prevent corruption,” he added. The Rajasthan Royals player was approached last month by his Ranji teammate with an offer of money if he followed a pre-decided pattern of play. Initially dismissing it as a joke, the player declined the offer and reported the incident to the BCCI’s Anti-Corruption and Security Unit (ACSU). Richie Benaud passes away: Sachin Tendulkar pays tribute

The latest incident brings back the memories of the 2013 IPL spot-fixing scandal which led to the arrests of three Rajasthan Royals cricketers including former India fast bowler S Sreesanth. The spot-fixing saga also forced N Srinivasan to step down as BCCI president after his son-in-law Gurunath Meiyappan was found guilty of betting. Richie Benaud passes away: Eight videos that highlight the legendary commentator’s career 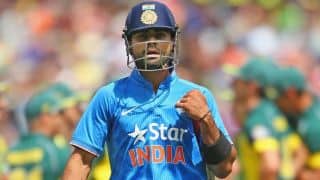