A packed Chinnaswamy stadium in Bengaluru on Sunday as hosts Royal Challengers Bangalore took on Sunrisers Hyderabad in IPL 2016 Final.

Bengaluru: A packed Chinnaswamy stadium in India’s tech hub rocked on Sunday as hosts Royal Challengers Bangalore (RCB) took on Sunrisers Hyderabad (SRH) in the 9th edition of Indian Premiere League (IPL) for the title that eluded them twice in the past. As clouds played hide and seek and rain gods stayed away for the night, about 32,000 frenzied fans flocked to the floodlit ground for a cracker of contest, braving the city’s traffic snarls and security checks, including frisking at the gates. “It’s exciting to watch a high-voltage game, as the atmosphere in the stadium is electrifying. It’s worth the money as we don’t get to see an IPL final here every year and a home team playing for the title,” S Madusudhan, an architect, told IANS. Full Cricket Scorecard: Royal Challengers Bangalore vs Sunrisers Hyderabad, IPL 2016 Final

A Bombay High Court order to shift IPL games out of drought-hit Maharashtra to save water made BCCI move the final to Bengaluru early in May. The city, however, hosted an IPL final on June 1, 2014 when Kolkata Knight Riders (KKR) defeated Kings XI Punjab by three wickets to lift the title for second time. Though the die-hard fans came in droves early to witness RCB’s explosive batting set the stadium on fire, they were made to wait, as Sunrisers skipper David Warner chose to bat first on winning the toss and put up an imposing 209 target for RCB in 20 overs. Vettori lauds Cutting for SRH’s IPL 2016 final victory

RCB played twice in IPL finals but lost: first at Johannesburg in South Africa in 2009 against the defunct Deccan Challengers and second in Chennai against the suspended Chennai Super Kings in 2011. With Warner, Moises Henriques, Yuvraj Singh, and BCJ Cutting plundered RCB bowlers to post a defending 208 for seven wickets. When RCB openers Chris Gayle and skipper Virat Kohli stepped into the middle to chase the target with their explosive batting, the stadium came alive, with fans cheering, whistling and waving the team’s red flag. How can BCCI shorten IPL?

As Gayle storm hit Sunrisers’s strong bowling attack to post 100 in 9 overs, with Kohli bidding for his turn, the fans were delighted to see the Jamaican southpaw in his elements. Gayle scored 76 in 38 balls with eight massive 6s and four boundaries. Even as fans were betting on RCB chasing the target after the openers gave a solid start, with 114-run first wicket partnership, exit of Kohli in 13th over for 54 in 35 balls (2×6 & 5×4), followed by in-form AB de Villiers in 14th over for just 5, dashed their hopes of seeing the hosts even crossing the 200-mark.

With the middle order batters, including Aussie all-rounder Shane Watson failing to capitalise on the solid opening, the target remained beyond their reach by eight runs and the IPL title eluded RCB for the third time, that too, on home turf. “Though I am sorry for RCB to miss the cup again, as the target of 209 remained so near yet so far till the end, I am proud of them to have chased it till the last and treated its fans with amazing cricket this season,” TV Harish, a college student, told IANS after Sunrisers won the title for the first time. 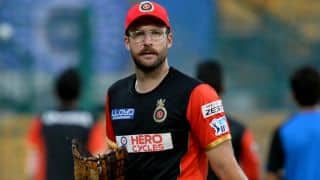 David Warner: If Chris Gayle got going in IPL 2016 Final, would have been difficult to stop him