Bengaluru: Unfazed by four defeats in six games in the Indian Premier League (IPL) 2016, Royal Challengers Bangalore (RCB) skipper Virat Kohli and big hitter Chris Gayle on Sunday used their feet on a different turf, and treated their die-hard home fans with dance moves. Though the home team arrived from Hyderabad post-noon after losing by 15 runs to Sunrisers Hyderabad (SRH) in a rain-delayed match on Saturday night, the duo had time to entertain a select gathering while unveiling an Adidas store in the upscale eastern suburb of Whitefield. “As the host team did not have a practice session ahead of its league tie on Monday night against Kolkata Knight Riders (KKR), Kohli and Gayle took time off to open the global sports shoes store at Virtuous Retail Bengaluru, an integrated lifestyle centre,” a company spokesman told reporters. READ: Virat Kohli, Chris Gayle, Sourav Ganguly and others’ dance videos on international dance day

Clad in a white T-shirt and light brown trousers, Kohli did a jig with his tall West Indian batter, who came in a black jersey and black shorts. Both sported Adidas shoes and fancy caps for the event. Video: Virat Kohli, Chris Gayle dance to Shane Watson’s tunes during RCB’s IPL 2016 party

After winning the first game, incidentally, over Sunrisers on April 12 and losing the next game to Delhi Daredevils on April 17, RCB played four away matches, in the league’s first phase, losing to Mumbai Indians in Mumbai on April 20, but winning over Rising Pune Supergiants at Pune on April 22 and losing to Gujarat Lions at Rajkot on April 24. With four points from six games, the two-time finalists are at the seventh position in the points table of the league’s ninth edition. 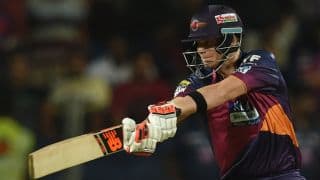