Dinesh Karthik waged a lone battle for Gujarat Lions (GL) against Kings XI Punjab (KXIP), but lack of support from the other end resulted in a defeat for his side.

Dinesh Karthik waged a lone battle for Gujarat Lions (GL) against Kings XI Punjab (KXIP), but lack of support from the other end resulted in a defeat for his side in the Match No. 26 of the ongoing Indian Premier League (IPL) 2017, by 26 runs. Having done a decent job of restricting a rampaging KXIP under 200, Gujarat Lions had given themselves an excellent opportunity to chase 189 on a batting-friendly wicket at the Saurashtra Cricket Association (SCA) Ground in Rajkot on Saturday. However, barring Karthik and Suresh Raina (32), Gujarat batting fell apart in pursuit of a stiff challenge on their home ground, and managed a mere 162 for 7 in their 20 overs. FULL CRICKET SCORECARD: Kings XI Punjab (KXIP) vs Gujarat Lions (GL), IPL 10, Match 26

The last-placed Gujarat Lions in the IPL 2017 Points Table have now lost 5 out of their 7 matches so far in IPL 10, which is a far cry from their dominating show in the previous edition. Gujarat Lions struggled in their reply, with Brendon McCullum falling for a mere 6 in the first over. McCullum started off with a first-ball boundary off Sandeep Sharma, but it was the bowler who had the last laugh. He tested McCullum with a full toss directed towards the wicket on the final ball, and the batsman was trapped leg-before after missing to connect. FULL CRICKET BLOG: Kings XI Punjab (KXIP) vs Gujarat Lions (GL), IPL 10, Match 26

Suresh Raina tried reviving the Gujarat Lions with a few boundaries, but at the other end, Aaron Finch failed to make most of the batting powerplay. It was on the final ball of the fourth over when Finch opened up, hitting T Natarajan for a six.

Raina kept looking for the boundaries but he had no support from the other end. On the fourth ball of the sixth over, he made room to hit Mohit Sharma. The bowler saw the adjustment and bowled short and wide, to which Finch hit in the air towards Marcus Stoinis at cover. Stoinis did well to cover some ground and take a diving catch, which was ruled in favour of the fielding side only after the TV replays.

Karthik joined Raina to strengthen Gujarat Lions, and the two batsmen did well to start looking for quick runs. Karthik began with a first-ball boundary, whereas Raina looked for rotation of strike to keep the scoreboard ticking. But against the run of play, Akshar Patel struck to remove Raina, getting the batsman caught at deep midwicket by Glenn Maxwell, and thus completing his 50th wicket in IPL.

The asking rate kept increasing and Gujarat never really picked up on their scoring. Ravindra Jadeja was promoted ahead of Dwayne Smith, and he was dismissed by KC Cariappa on the final ball of the 12th over. Smith fell in the next over, being caught at long-off by Stoinis off Akshar as Gujarat kept slumping.

Tye, whose services with the bat were never required with such desperation as they were on Saturday, did not disappoint when he cracked 10 runs hitting a six and a four off Akshar in the 15th over of the chase. Tye perished after scoring 22 off 12 balls, but his effort was also not enough.

Karthik remained unbeaten on 58, for which he faced 44 balls and struck 6 boundaries. Karthik tried holding it all together towards the end. However, the asking run rate which shot through the roof was too much to handle for one batsman alone, and some smart bowling by KXIP towards the end resulted in a 26-run victory.

With this win, KXIP move to the fourth spot in the IPL 2017 Points Table with 3 wins and 4 defeats in 7 matches. Gujarat Lions, on the other hand, remain at the bottom. 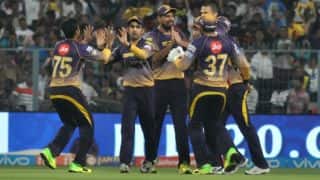