Andrew Tye became the first player to take a hat-trick as well as five-for during Gujarat Lions (GL) vs Rising Pune Supergiant (RPS) in IPL 2017.

In the previous editions of Indian Premier League (IPL), Gujarat Lions (GL) chased down 164 and 196 at Rajkot and Pune respectively against Rising Pune Supergiant (RPS). In the 10th edition, the story unfolded quite similar. GL achieved the 172-run target in a matter of 18 overs at home, pocketing their first win in three matches. RPS, on the other hand, faced their third consecutive defeat. While Andrew Tye became the first player to take a hat-trick as well as a five-for on IPL debut in the first innings, the opening duo of Brendon McCullum and Dwayne Smith went bonkers and laced 94 runs off 53 balls to seal the deal. FULL CRICKET SCORECARD: GL vs RRPS, IPL 2017 Match 13

Dwayne Smith started off with two fours and six to express his intentions in the very first over. McCullum, on the other hand, joined the party and batted as if he has nothing to lose. The retired international cricketers indeed had a ‘Good Friday’ batting together. Smith and McCullum had done it for Chennai Super Kings (CSK) a couple of years and emulated the same when they were asked to do it again for the first time this season.

After these two scored half the runs together, rest of the batsman did not have enough to do. With required run rate quite in control, Suresh Raina and Aaron Finch scored 35 and 33 respectively to keep the sheet clean against RPS.

Imran Tahir, the joint highest-wicket taker of this season, took only a wicket giving away 53 runs in his 4 overs. Unlike the previous matches, his googlies could not catch the batsmen in trance. However, it were the domestic bowlers who looked to have at least some impact. Shardul Thakur dismissed Smith with a slower short-ball, and Rahul Chahar got the better of McCullum. Meanwhile, Lokie Ferguson gave away 44 runs in his full quota. Live cricket score: GL vs RPS, IPL 2017, Match 13

All in all, Raina had a good time in his 150th IPL match the first ever to do so.

The track was as flat as it can be. Though it had a thin film of grass on it, the ball came sweetly onto the bat. Smith and Rahul Tripathi scored 43 and 33 respectively, but none of the middle-order batsmen could up the ante and post a safer total than this. Ben Stokes, too, started off well but could not get into the groove.

On the other hand, MS Dhoni faced another setback, failing to put away Ravindra Jadeja’s arm-ball. However, amidst the batting failure, Manoj Tiwary and Ankit resurrected the innings with their late blitz of 31 and 25 respectively. They, in fact, could have added more runs in the last over, but Tye took a hat-trick and spoiled the party. He could have got another wicket, but Jadeja at mid-wicket could not hold on to a flat catch.

Man of the Match: Andrew Tye 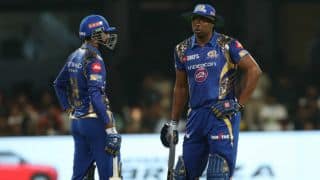