KKR vice-captain Suryakumar Yadav said that skipper Gautam Gambhir had a big role in promoting Chris Lynn up the order in IPL 2017.

Rajkot: Kolkata Knight Riders‘ (KKR) vice-captain Suryakumar Yadav said that skipper Gautam Gambhir had a big role in promoting Chris Lynn up the order after watching his meaty blows during team’s training session at the Eden Gardens. “From the time Chis Lynn joined the KKR camp in Kolkata, the skipper told him that he will be opening the innings. So it wasn’t an instinctive decision but a pre-planned move,” Surya told mediapersons after the match. Any team targets a solid start to the tournament and it was no different for the KKR. FULL CRICKET SCORECARD: Gujarat Lions vs Kolkata Knight Riders, IPL 2017, Match 3 at Rajkot

“It was a big total as both sides playing first match of the tournament and 183 wan’t an easy target on any wicket”, he said. Surya said that Sunil Narine and Kuldeep Yadav needed to be played as they bring in different varieties. “Spinners are our strength. Both our spinners [Kuldeep Yadav and Sunil Narine] are very good spinners and keeping anyone out of the game would not be a good for their confidence.” Earlier, lynnsanity struck Indian Premier League (IPL) in Match No. 3 at Rajkot when Kolkata Knight Riders (KKR) took on Gujarat Lions (GL). The KKR openers Gautam Gambhir and Chris Lynn made mockery of Gujarat attack and chased down 184 runs without losing a single wicket and 31 balls to spare. FULL CRICKET UPDATES: Gujarat Lions vs Kolkata Knight Riders, IPL 2017, Match 3 at Rajkot

Lynn, who has a six-hitting reputation in Big Bash League (BBL), opened the innings and hammered 41-ball 93 not out, a knock which had 8 sixes. The player of the BBL for 2016 and 2017 also stitched the highest ever opening stand in the history of IPL with Gambhir, who remained unbeaten on 48-ball 76. 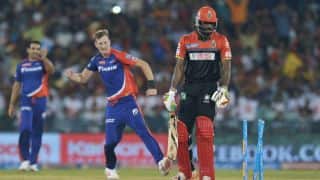 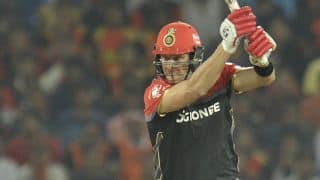