Hashim Amla s sublime form and vital contributions from Shaun Marsh, Glenn Maxwell and Akshar Patel helped Kings XI Punjab (KXIP) set a 189 run target, against Gujarat Lions (GL) on Sunday. In the 26th game of the ongoing Indian Premier League (IPL) 2017 tournament, Kings XI Punjab produced yet another splendid batting display, led by Amla and Maxwell. To their credit, Gujarat Lions did well to grab a couple of wickets in the middle overs to dent KXIP s hopes of a total in excess of 200, which looked achievable after Amla and Maxwell had added 47 runs in a little less than five overs. FULL CRICKET SCORECARD: Kings XI Punjab (KXIP) vs Gujarat Lions (GL), IPL 10, Match 26

Amla picked from where he left in Indore. Having scored a century in the previous game, Amla continued to play strokes around the park and batted with supreme authority to score 65 off 40 balls, studded with 9 boundaries and 2 sixes. On the other hand, Maxwell batted like a man possessed, looking to attack almost every ball that he faced. He was eventually dismissed for 31, but not before putting KXIP in a position of command. Towards the end, Akshar chipped in with a 17-ball 34 to push KXIP towards a big total. FULL CRICKET BLOG: Kings XI Punjab (KXIP) vs Gujarat Lions (GL), IPL 10, Match 26

The tone of a big first innings total was set early when KXIP added 11 runs off the first over. Gujarat Lions decided to open the bowling attack with Shubham Agarwal, and Amla struck two boundaries. Nathu Singh, another debutant for Gujarat Lions in the game, had a start to cherish, thanks to Dinesh Karthik. Nathu generated an outside edge off Manan Vohra s bat, but it was a brilliant catch from Karthik which resulted in that dismissal. Karthik was sharp enough as his dive was timed perfectly.

Karthik, with the dismissal of Vohra, became the first wicketkeeper in the history of IPL to complete 100 dismissals. The 31-year-old cricketer, who has played for Delhi Daredevils (DD), Royal Challengers Bangalore (RCB), Mumbai Indians (MI) as well as Kings XI Punjab (KXIP) apart from Gujarat Lions, has 74 catches and 26 stumpings to his credit in IPL history.

Amla then teamed up with KXIP veteran Marsh for 70 runs, which came in about next 8 overs. Marsh contributed with a 24-ball 30, and was immediately dismissed after the first strategic break, playing a slow ball straight to the man at mid-on. But before that, Amla and Marsh had put up a strong foundation for a big score.

After Marsh’s dismissal, Maxwell strode out and began looking for quick runs right from the onset. Maxwell and Amla added 47 runs in 28 balls to turn up the heat on Gujarat Lions. While Amla continued with his exquisite strokeplay around the ground, Maxwell turned up all guns blazing. Even though KXIP were batting first in the contest, the urgency with which Maxwell batted in his innings made it look like as if his side was chasing a huge target.

However, Gujarat Lions did well to apply brakes on KXIP at just the right time. Both Maxwell and Amla were dismissed in quick succession, with the latter falling first. Amla was dismissed on the final ball of the 14th over, when Shubham Agarwal claimed his maiden IPL wicket, taking a return catch of the in-form KXIP batsman. In the next over, Ravindra Jadeja trapped Maxwell leg-before when the batsman tried a switch-hit, but failed to connect. Maxwell hammered 3 sixes and 1 boundary to score a rapid 18-ball 31.

Marcus Stoinis could not do much and his poor show with the bat in the IPL continued. Even though he added 25 runs with Akshar in the later stages, Stoinis could contribute with a mere 7.

Akshar was belligerent towards the end of the innings, showing good batting skills to garner runs late in the innings. His innings of 17-ball 34 was instrumental in pushing the KXIP total to 188 for 7 at the end of the 20 overs. Akshar smacked 2 sixes and 3 boundaries in his innings. However, given their meek bowling attack, the target is certainly not big enough for KXIP. 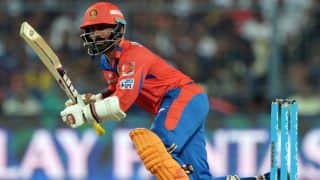 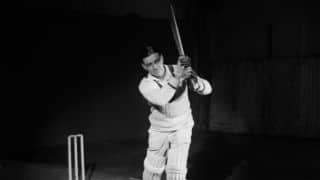