IPL 2017 Playoffs: It is never easy making comeback and immediately making a mark but Kolkata Knight Riders (KKR) Nathan Coulter-Nile exactly did that.

It is never easy making comeback and immediately making a mark but Kolkata Knight Riders (KKR) Nathan Coulter-Nile exactly did that. Coming back from injury, the Australian pacer bagged 3 for 20 from his four overs to restrict Sunrisers Hyderabad (SRH) to 128 in the IPL 2017 Eliminator at M Chinnaswamy Stadium in Bengaluru. KKR eventually won the contest by 7 wickets (D/L method) to go into Qualifier 2 and meet their nemesis Mumbai Indians (MI) on Friday. Coulter-Nile considers the wicket of David Warner as the turning point in the game. The SRH skipper was cleaned up by leg-spinner Piyush Chawla. FULL CRICKET SCORECARD: Sunrisers Hyderabad (SRH) vs Kolkata Knight Riders (KKR), IPL 2017 Playoffs, Eliminator at Bengaluru

A downpour at Bengaluru resulted in an over three-hour stoppage and once the play resumed at 12.55 am, KKR were chasing a revised target of 48 from six overs. KKR pulled off a win courtesy their skipper Gautam Gambhir’s calmness. However, it was Coulter-Nile, who won the Man of the Match award for his stellar effort with the ball. In fact, the Western Australian has now won three MoM awards from the seven games he has played for KKR this season.

He missed a few games due to an injury he sustained against Rising Pune Supergiant (RPS) at Eden Gardens, where he was struck on the helmet by a delivery from Dan Christian. On his comeback, Coulter-Nile said, “It is feeling little better as it was a couple of days ago. I never thought it would affect me as much as it did. I went to bed at 10 pm and woke up at 7 pm the next day and I had headaches. I am glad it is over now.” FULL CRICKET UPDATES: Sunrisers Hyderabad (SRH) vs Kolkata Knight Riders (KKR), IPL 2017 Playoffs, Eliminator at Bengaluru

He then spoke about the wicket at Bengaluru, which he believes was completely opposite to Kolkata’s. Though he claimed three wickets, that of Kane Williamson, Chris Jordan and Vijay Shankar, he felt it was the wicket of Warner that proved to be the “turning point”. He also went on to credit Umesh Yadav’s efforts at the start.

“The wicket is exact opposite to Kolkata. Good pace in Kolkata, here it was slow and low. Thought all the bowlers did really well. Piyush removed Warner that I thought was the turning point. He is that kind of a bloke who can turn a 130 into a 150 or 160. That started with the first over. Umesh was great. Warner playing and missing in the first over gave us belief,” he added. IPL 2017 Playoffs: Had it been a 20-over game, SRH had the bowling to defend, feels Muralitharan

KKR did survive some anxious moments with the downpour at Bengaluru. Had there been no play, SRH would have qualified on basis of finishing ahead in the points table post the league stage. “It kept raining and raining. The covers kept coming on and off. So, we were getting twitchy. No thoughts just as yet. Just get some sleep and recover for the game against Mumbai.

“When it was raining, we were quietly confident because 12.50 am was the cut off time. But it rained and rained and we were itchy,” he added. KKR will now play MI on Friday at the same venue and will be praying that the rain gods will stay away. 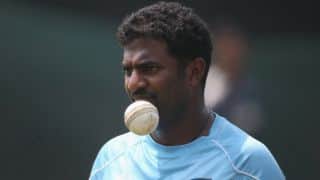 IPL 2017 Playoffs: Disappointed of not getting through, but overall happy with Sunrisers Hyderabad’s performance, says Muttiah Muralitharan 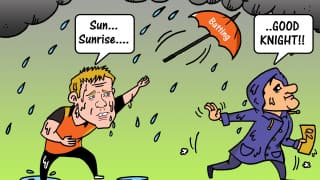