Rising Pune Supergiant (RPS) had won both their matches against Delhi Daredevils (DD) in the previous edition of Indian Premier League (IPL). When they invited DD to bat, they would not have expected DD to register their biggest win (in terms of runs). Well, for that matter, they would not have expected someone like Sanju Samson to go all guns blazing and score his maiden century. Before this stellar display, Samson had only 5 half-centuries in 53 matches. He, however, thanked his coach Rahul Dravid for backing him, after his side thrashed RPS by a massive margin of 97 runs. Full Cricket Scorecard, Rising Pune Supergiant vs Delhi Daredevils, IPL 2017, Match 9

After posting 205 for 4, DD bowlers had a tough task to skittle out the batting-heavy RPS amidst the dew factor that Ajinkya Rahane had mentioned at the toss. “The wicket looks really good. There was dew in the last game we played here and hence the decision to field,” said Rahane. However, RPS were without the services of their regular captain Steven Smith. Smith is not well and I had to step in. It is an opportunity for the boys and hopefully we will do well. Stomach bug keeps Smith out,” added Rahane.

There was some dew but not threatening enough for the DD bowlers. Amidst the cheering for the home team at Maharashtra Cricket Association Stadium in Pune, Zaheer Khan and co. took only 16.1 overs to skittle RPS out for 108.

With no Smith in the side, RPS drafted in Faf du Plessis, but he tried to scoop a spinner only to eventually edge it to the wicketkeeper. Before that, Rahane had already dismissed for 10. Ben Stokes, too, tried to use his long handle to blasting effect but fell to Patt Cummins’ knuckle ball.

MS Dhoni was the last man to lead the resurgence. He started with a six down town, reviving the faded hopes. With half the side back in the pavilion, he needed a few more sixes to steady the sinking ship. Hence, he went for another glory shot but found a man in the deep. And a few overs late, the RPS team was shaking hands with the visitors.

However, the old warhorses had a good time in the middle. While Amit Mishra merely missed his fourth hat-trick in IPL, Zaheer took 3 for 20. Chris Morris, on the other hand, may have taken only a wicket but it was his 9-ball 38* that took DD past 200.

As a matter of fact, Imran Tahir’s 1 for 24 had contained the onslaught but DD went full throttle in the death overs and bludgeoned 76 runs in the last 4 overs. “Delhi got the momentum in the last three overs. No blame at all,” said Rahane in the post-match presentation.

“Almost a perfect game, we needed that. This team has got plenty of potential. Just need to back them. We just need to work on the processes. We got a lot of things right in the first game, but this win will help us go a long way in the tournament,” concluded the victorious Zaheer. 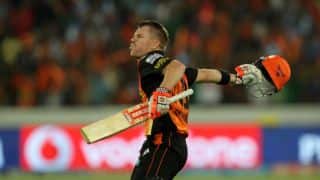