Rashid Khan said that the prayers from Afghanistan and adulation of people only egg him on to perform better.

Defending champions Sunrisers Hyderabad (SRH) have been unstoppable in the current edition of Indian Premier League (IPL) 2017. After notching up a convincing win over Kings XI Punjab (KXIP) Friday, April 29 evening, SRH have moved an inch closer to the IPL 10 play-offs round with 11 points to their name in 9 matches. One of the main reasons for the success has been their Afghanistan recruit Rashid Khan. Rashid is the first player from terror-torn region to play in the IPL along with his national teammate Mohammad Nabi (also with SRH). Rashid has been quite unplayable in the IPL, nabbing as many as 11 wickets in 8 games. Rashid was adjured the Man of the Match for his measly spell against KXIP in Match No.33. Full Cricket Scorecard, Kings XI Punjab vs Sunrisers Hyderabad, IPL 2017, Match 33

In the post-match conference, Rashid spoke about his time with SRH so far and how people back in Afghanistan are praying for the duo s success in IPL.

Rashid said that the prayers from Afghanistan and adulation of people only egg him on to perform better. “If you see whole Afghanistan is watching this league and the way they are supporting us both me and Nabi[Mohammad Nabi] it’s just amazing. Their prayers really help me you know. And whenever there is a match they all are praying for us, they are watching very keenly,” Rashid was quoted as saying by iplt20.com.

Further adding, “So back to Afghanistan, they are really keen on watching this league, because IPL is one of the biggest league in the world so, their backup, their support very help me and give me energy.”

He also spoke about his relationship with SRH bowling coach,” Actually if you see most of the India/Asia wickets they are good for the spinner. I have been working a lot with my coaches specially Muttiah Muralitharan, he is the best spinner in the world so. He has been helping me and given my all the confidence. I am just go there and doing my best.”

Rashid also spoke about how his time in the IPL will help him in the long run for Afghanistan.

“Actually it makes a lot of difference to me, because playing with big names in the league, some big coaches getting their experience so it has helped really me a lot in what I am doing. Trying my best to gain their experience, to do my best and Insha’Allah in future will work hard for the 4-day, Test match and specially the 50-over game. So I am just working hard for it and mentally preparing for it,” Rashid quipped. 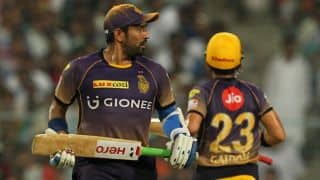