Remember the Indian Premier League (IPL) 2017 contest between Gujarat Lions (GL) and Delhi Daredevils (DD) wherein Rishabh Pant smashed 97 off just 43 deliveries? The game wherein we saw the Gujarat skipper Suresh Raina walking up to Pant and consoling him after losing his wicket went down as one of the most memorable moments in IPL 10. Just to give you a complete picture, GL had batted first and hammered 208 for 7, thanks to a 133-run partnership between Raina (43-ball 77) and Dinesh Karthik (65 off 34). But a 143-run second-wicket partnership between Rishabh Pant (97 off 43) and Sanju Samson (61 off 31) saw DD winning the game by 7 wickets and 15 balls to spare.

That particular match saw Pant going all guns blazing, as the 19-year-old smashed 9 sixes and 4 boundaries in his innings and he looked all set to get to his maiden IPL century. But completely against the run of play, Pant edged it to wicketkeeper Karthik which saw the left-handed missing from the magical three-figure mark by 3 runs.

But what came as a beautiful gesture was Raina walking up to Pant and appreciating and consoling the youngster for his knock paving the way for an emphatic victory.

“I had to acknowledge Pant’s brilliant knock. He was finishing it in 16-17 overs. I just told him don’t get upset & consoled him,” Raina said in the recently held CEAT Cricket Awards 2016-17 in Mumbai. 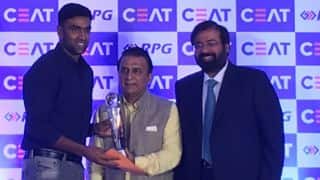