Rahul, who has been the opening partner of Gayle, said the West Indian's energy seems to be increasing even as he grows older.

Punjab opener KL Rahul Sunday said his team-mate and West Indian swashbuckling batsman Chris Gayle was a mischievous player in the dressing room, besides being one of the best players in the T20 format. (ALSO READ: We ll look to exploit Smith s rustiness: Punjab skipper Ashwin)

Rahul, who has been the opening partner of Gayle, said the West Indian’s energy seems to be increasing even as he grows older. (ALSO READ: Ajinkya Rahane and Co. seek winning start at fortress)

“Gayle is the best T20 batsman the game has ever had. But he is always up to a mischief and tries to pull my legs. He does not seem like a senior player in the dressing room but in fact he is the naughtiest and most mischievous player in a dressing room,” Rahul said ahead of their Indian T20 League match against Rajasthan.

“I have played with Gayle for quite a while, we had an opportunity to bat together for a few years in RCB and he considered me as a 21 year boy. I have learnt a lot from him. I love his company,” he added.

The India opener said just like last year, Gayle has come with a lot of energy this time also.

“Each year as he grows older, his energy is getting more and more exciting for us. I am looking for more and more partnerships together,” said Rahul.

Talking about himself, Rahul said he does not set personal goals and he was not thinking about the upcoming World Cup but focusing on Indian T20 League.

“I just want to focus on IPL and try and win as many matches for my team. I don’t set personal goals,” he said.

“It is nice to have him back but he was always a part of Royals family. We will focus on our own positives but know that Kings XI Punjab is a good side. Chris Gayle is still a dangerous player and we will not take them lightly,” Rahane said.

Coach Paddy Upton said cricket has significantly advanced in all departments except for the mental side of the game.

“Cricket has always been very much a mental game. In the past ten years, we have seen a lot of advancements made in terms of fitness, bowling strategies, batsmen are playing shots that were not played before, players are a lot fitter, we are seeing most incredible catches being taken at the boundary,” he said.

“All department of the game have undergone significant changes but probably the one department that has not advanced as others is the mental side of the game. It is the most difficult to measure, the most difficult to train. I think that this is one of the next significant frontiers we need to go and address. We would try and make strong the mental side of Royals cricketers.” 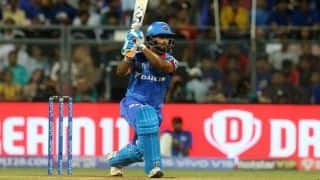