Watson, who was dropped on 33, by the outgoing Jonny Bairstow, smoked nine boundaries and six hits over the fence in his 53-ball 96.

Nothing went right for the Sunrisers Hyderabad and with Shane Watson peaking just at the right time his 96 leading the way for a thrilling Chennai Super Kings six-wicket win there was literally nothing SRH could do, but to witness a ‘Watto’ show unfold in front of them in the Indian Premier League (IPL 2019) match at the MA Chidambaram Stadium in Chennai on Tursday.

SRH, who would also rue their finishing with the bat, posed 176, a total captain Bhuvneshwar Kumar reckoned was a par score on the Chepauk surface. But nobody, not even Bhuvi envisioned a Watson performance. The Australian, who was dropped on 33, by the outgoing Jonny Bairstow, smoked nine boundaries and six hits over the fence in his 53-ball 96.

It was a par score on that wicket. There was dew on the ground but that didn’t really bother us. The way Watson batted we couldn’t really do much. The credit goes to Watson, Bhuvnehwar said at the post-match presentation ceremony.

Sandeep Sharma, who went for 22 runs all scored by Suresh Raina in the last over of the Powerplay was the most expensive bowler in the SRH attack going for 54 runs in 3.5 overs. Afghanistan legspinner Rahid Khan went for over 10 runs an over in his four overs. This is probably the first off day for Rashid in three years, anyone can have an off day, Bhuvi said. (ALSO READ: Absolutely loved it! Jonny Bairstow bids adieu to IPL 2019)

Meanwhile, SRH failed to give a fitting farewell to Bairstow, who leaves the squad tonight to join the England team to gear up for the ICC World Cup 2019.

We will obviously miss Bairstow, but we have players in the squad who can replace him. We have three away games now out of four and we have to win those games to qualify. We have to be our best to defeat RR. I have learnt a lot doing captaincy, the fast bowler explained. 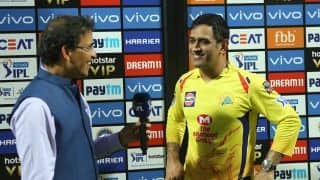