Watson, who fell agonisingly four runs short of what would have been his fifth IPL century, smashed nine boundaries and six towering hits over the fence in his his show that last 53 balls.

Shane Watson roared back to form smashing a thunderous 96 to guide Chennai Super Kings (CSK) to a clinical six-wicket victory in their Indian Premier League (IPL 2019) clash against Sunrisers Hyderabad (SRH) at the MA Chidambaram Stadium on Tuesday.

The win, a much-needed one for CSK, who returned home on the back of successive defeats, ensured they grab the top spot from Delhi Capitals in the points table.

Watson, who fell agonisingly four runs short of what would have been his fifth IPL century, smashed nine boundaries and six towering hits over the fence in his his show that last 53 balls which was brought to an end by Bhuvneshwar Kumar after he top edged it to Bairstow, who took a stunning one-handed catch diving to his left.

There was some late drama in the match after Watson departed with CSK needing nine runs off the final over. Kedar Jadhav smashed a six off Sandeep Sharma, the most expensive of the SRH bowlers with 54 runs in his 3.5 overs, but on the other side, Ambati Rayudu lost his wicket. However, Jadhav, as cool as a cucumber, sealed the win for the hosts, who have now virtually sealed a berth in the playoffs.

Chasing 176 which was going to be no mean feat specially going by the wobbly CSK top-order form in the earlier matches, the hosts began very slowly with no run being scored in the first 10 deliveries that included a maiden from Bhuvneshwar Kumar. Adding insult to injury was the early departure of Faf du Plessis thanks to a direct hit from Deepak Hooda in the third over that sent the South African back for just 1.

CSK needed Watson and Suresh Raina to fire and they did exactly that. Watson, who has not been in the best form, hit his straps, as he and Raina peaked at the right time. The duo combined to add 77 runs for the second wicket.

Raina, who was the first to break the shackles, was responsible for upping the ante when he scored 22 runs that included four boundaries and a huge hit over the fence in the last over of the Powerplay bowled by Sandeep Sharma.

Watson, who was dropped by Jonny Bairstow on 33 in the ninth over, followed suit. After taking his time to settle down, he freed his arms in the fifth over when he whacked Khaleel Ahmed for a huge hit over the square leg boundary and followed it up with a hoick over extra cover for a boundary. There was no stopping him thereafter!

Despite the loss of Raina, who fell for 38, after he was stumped while coming down to Rashid Khan, Watson was on autopilot mode and brought back memories of the IPL final last year. For Hyderabad, Rashid and Bhuvneshwar ended with one wicket apiece.

It was a very un-CSK like performance both in the bowling and fielding department. Pandey received a reprieve in the penultimate over off Deepak Chahar of the innings after one of the better fielders in the side Suresh Raina drops a sitter that summed up not only his batting, but his fielding too which has not been upto the mark this season. Pandey s 49-ball stay at the crease was laced with seven boundaries and three hits over the fence.

Put into bat, Jonny Bairstow s fine IPL story came to a sorry end as early as the second over after the Englishman departed for a duck thanks to senior India offspinner Harbhajan Singh, who made his way back into the side in place of Shardul Thakur. It was a quicker one and was wide of off from Harbhajan and it skid off the deck to take the outside edge of Bairstow, who played down the wrong line and Dhoni didn t miss it from behind.

Promoted up the order to No. 3, Pandey looked in no mood to waste the opportunity. He filled Bairstow s gap with equally good strokes. Pandey and Warner matched each other stroke for stroke, taking the attack back to the opposition and they did receive help from a unexpected belter of a track.

Despite the departure of Bairstow, Warner and Pandey kept up the ante as the duo forged a massive 115-run partnership for the second wicket with both of them registering half-centuries in almost the same time.

Pandey was the first to get to his fifty in 25 deliveries his best of the season and could possibly be the best of his IPL career his 13th in the IPL. He became the first Sunrisers batsman other than Warner or Bairstow to hit a fifty this season.

Warner reached his half-century in 39 balls, his 43rd in the IPL, but immediately fell prey to a Harbhajan delivery in the 14th over. Harbhajan gave it plenty of air and caught the Australian southpaw on the move. He swung it wildly, but his bottom hand came off and in the bargain his back foot too got dragged too far. Dhoni spotted it and he didn t miss the chance to whip the bails off. Warner departed for a brilliant 57 off 45 his innings decorated with three boundaries and two sixes.

Pandey then received good support from Vijay Shankar, who added 26 off 20 before he became Chahar s victim in the 19th over, but Pandey was rock solid and truly was the backbone of the SRH innings.

CSK have lost two consecutive matches for the first time since re-joining the tournament in 2018 and have been displaced from the first position in the points table too. Sunrisers Hyderabad were the same team who inflicted a heavy defeat to CSK in their reverse fixture. With no Kane Williamson who has flown back home due to the death of his grandmother, Bhuvneshwar Kumar is back to leading the side again. Shakib Al Hasan gets to play his second game of the season, while Pandey comes in place of Shahbaz Nadeem. 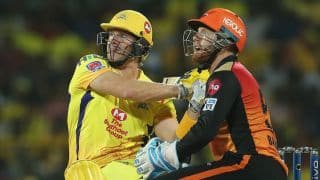 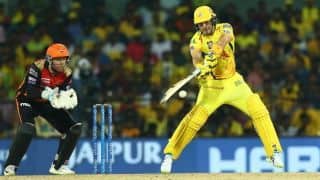