While RR will be chasing a win to keep their playoffs hopes alive, DC, who are already made it to the playoffs, are aiming for the top two finish.

Ajinkya Rahane has won the toss and Rajasthan Royals (RR) have elected to bat against Delhi Capitals (DC) in the 53rd match of the Indian Premier League (IPL) 2019 at the Feroz Shah Kotla in New Delhi on Saturday.

Rahane, who was reappointed as RR skipper following Smith’s return to Australia for the World Cup 2019, said that his team will look to put runs on the board.

“We will bat first. The wicket looks dry, not sure how it will play, might get slower and slower, will look to put the runs on the board,” said Rahane. (IPL 2019, DC vs RR: FOLLOW LATEST UPDATES)

“For me, the team comes first, I respect their decisions, it’s a great challenge and it’s important to play well and win,” added Rahane.

“We have a couple of changes, Ish Sodhi and Krishnappa Gowtham are in, for Smith and Unadkat. It’s all about giving our best,” concluded the RR skipper.

While RR will be chasing a win to keep their playoffs hopes alive, DC, who are already made it to the playoffs, are aiming for the top two finish.

“It’s an important game for us, we need to have a mindset of playing every game as a knock-out match, we are in a good mood as a team. Our batsmen love to bat on good bouncy wickets, this been a slow wicket – we didn’t expect it, but we can’t blame the wickets for our poor show here,” said DC skipper Shreyas Iyer.

“Two changes for us, Keemo and Ishant are in, they replace Suchith and Chris Morris,” concluded Iyer. 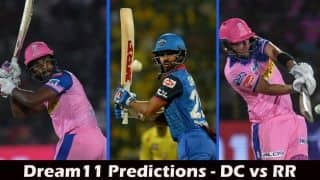