Delhi franchise beat Royal Challengers Bangalore to reach the IPL playoffs for the first time since 2012.

Delhi Capitals on Sunday claimed a spot in the IPL 2019 play-offs – the first time any Delhi franchise has done so since 2012 – and with victory over Royal Challengers Bangalore at the Feroz Shah Kotla on Sunday, Shreyas Iyer’s team also took top spot on the points table.

For Delhi Capitals’ coach Ricky Ponting, the belief in the squad has been most visible in a potentially path-breaking season.

“We’ve probably done it the hard way tonight, but the boys are really starting to believe in themselves, they are trusting one another, and playing some good cricket. So all in all, we are pretty happy with where we’re at,” said the former Australia captain. “You want to be peaking at the right time, so for us to bounce back after a five-day break and win tonight was a really good thing.”

With 16 points on the leaderboard, DC now travel to Chennai to play defending champions Chennai Super Kings, the other team to have sealed passage to the IPL playoffs.

The MS Dhoni-led franchise has not lost a single home match this season, which leaves Delhi with a tough task.

“We go to Chennai now, which is a hard place for anybody to win, so that’s a great challenge for us,” said Ponting. “To the boys’ credit, we haven’t really talked about where we are on the table, just getting as well-prepared and planning as well as we can for the next challenge. So yeah, we’ve qualified, that’s really great, but two big games to go, and the target now will be to finish one or two.”

The IPL playoffs begin from May 7. 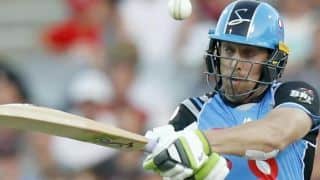