Warner, in particular, thanked VVS Laxman, the team s mentor for keeping the faith in the Australia opener.

David Warner, whose 12-month-long ban lifts on March 29, expressed gratitude towards his Indian T20 League franchise Hyderabad, for welcoming the former Australia vice-captain with open arms upon his return to the league. Warner, former captain of Hyderabad, due to a ban because of his involvement in the ball-tampering scandal that rocked the world a year back, missed the tournament in 2018. (READ: Strengthened Sunrisers Hyderabad a real threat)

Warner, in particular, thanked VVS Laxman, the team s mentor for keeping the faith in the Australia opener and mentioned how the former India batsman motivated Warner during his return to the Hyderabad camp. (READ: Test for Warner before World Cup)

“Laxman is a very, very humble human being and he always has nothing but nice things to say. The words he used the other day really meant a lot to myself, he’s just so genuine,” Warner told India Today. “With everything going on in the last four months, I was at the forefront of his mind, I’m in the Sunrisers family’s mind and that they’re going to welcome me with open arms as soon as the IPL starts. I’m really grateful for it and just ready to get back into it.”

A few days back, Warner and Steve Smith were welcomed back into the Australian fold at a team meet-up in Dubai. Both were invited by Australia coach Justin Langer as part of a team re-integration, following which Warner said it was like they d never left. Warner will likely feature in Hyderabad s league opener against two-time champions Kolkata on March 24.

“This is my second home and to come back here to open arms and to be greeted with the fans, some of the passionate and kind words, it means a lot to my family and myself. I’m just looking forward to the start of the tournament and playing and trying to go one step further from where the guys just couldn’t get further last year,” said Warner.

“I was just so thankful and grateful for the support the Sunrisers family and chairman and his wife and daughter showed to me in the past 12 months and I’ll forever be grateful for that. The whole entire team was sending me nice messages and I was on group chat throughout the tournament last year as well. I was very thankful and pleased to be a part of that because I felt like I was there when I was watching it.”

It was under Warner that Hyderabad lifted their maiden IPL trophy in 2016, a season in which the captain had led the way with 848 runs in 17 matches. The next season, the Australian ended up scoring another 641 runs at an average of almost 59 and remains a key performer for the Hyderabad-based franchise this year.

“The fans have been fantastic. My teammates, lots of cuddles and high-fives… it’s been brilliant. It felt like I was at home I can’t thank them enough for sticking by me and always sending me nice messages,” he said.

“It would be wrong for me to say I wasn’t emotional. I texted my wife and said ‘look I can’t get the smile off my face’. Because it’s my second family, it was literally overwhelming because I’m back where I feel like I’m at home.” 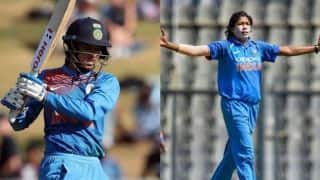