Tahir, at 40, also became the oldest player to win the cap.

Incidentally, Tahir, at 40, also became the oldest player to win the cap. The ace wrist spinner edged past Rabada, who turned out for Delhi Capitals before injury curtailed his campaign, when he flummoxed Mumbai Indians’ Ishan Kishan in the final of the cash-rich league, for his 26th wicket.

“I am really grateful to Chennai for giving me an opportunity at this age. I just want to keep going and would like to thank my support staff,” Tahir said. “It’s sad to lose, but credit to Mumbai and they deserve this victory. I am pleased to see all this at a late stage in my life. It is the best league and I have been working hard for very long in my life, it isn’t easy to bowl to the Indian and the overseas players. I love the game and I would love to carry on for as long as I can.”

Tahir picked up the wickets in 17 matches at a measly economy rate of 6.66. With 26 wickets, he also broke the joint record of most wickets in a season by a spinner held by Sunil Narine and Harbhajan Singh. Harbhajan and Narine took 24 wickets each to achieve the feat in 2012 and 2013 respectively.

Prior to the summit showdown of the 12th edition, pacer Rabada led the charts with 25 wickets in 12 matches before back injury ended his campaign. Tahir returned with figures of 2/23 in three overs, also picking up the wicket of Suryakumar Yadav, besides Kishan.

Kishan went for a slog sweep but top edged it, and Suresh Raina took an easy catch at point. His first wicket of the game came in his first over itself when Suryakumar inside edged the ball on to the stumps. 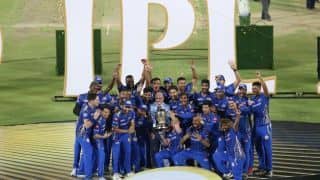