Buttler said he did speak with Ashwin after the March 25 runout which even brought disapproval from the MCC, the arbiter of the game's rules.

England’s Jos Buttler has declared an end to his showdown with Indian spinner Ravichandran Ashwin after being dismissed by a “Mankad” runout in the Indian Premier League (IPL 2019).

The Rajasthan Royals star had a heated exchange with the captain of Kings XI Punjab after being run out at the non-striker’s end while backing up in an incident that sparked an international debate on the “spirit of cricket”.

Buttler told the Times of India on Tuesday he had looked at replays and was sure he should not have been given out. “But it’s all done now, and I have moved on.” (ALSO READ: I don’t do anything that is illegal, have no regrets on Mankading Jos Buttler: R Ashwin)

The dismissal, named after former India player Vinoo Mankad, is legal but is seen by many as unsporting unless the batsman has been warned first.

Buttler said he did speak with Ashwin after the March 25 runout which even brought disapproval from the MCC, the arbiter of the game’s rules.

“I just asked him if he really wishes to play the game that way. Whether he thought it was the right thing to do,” Buttler said. “And he obviously thought it was, in his opinion.” (WATCH: Warner takes a slight dig at Ashwin over mankad controversy)

Ashwin, who has been unrepentant of his act, seemed to have waited for Buttler to leave his crease before clipping off the bails.

Buttler, who was a victim of a Mankad dismissal by Sri Lanka’s Sachithra Senanayake in 2014, said he “will make sure it doesn’t happen again”.

With minds already turning to the ICC World Cup 2019 which starts Mmay 30 soon after the IPL ends, Buttler said the title was an open race. “We are one of the favourites. Traditionally, in World Cup, India and Australia are up there as well,” the hard-hitting batsman-wicketkeeper said. (ALSO READ: ‘It s too late to say sorry Mr. Ashwin, you will be remembered for that low act’)

“We are playing some really good cricket. But World Cup tournaments, knockout tournaments are always high pressure situations,” he said of the tournament.

Buttler has been in good form for Rajasthan, scoring 176 runs in five T20 matches including two half-centuries. His England team-mates in Jonny Bairstow, for Sunrisers Hyderabad, and young all-rounder Sam Curran, for Punjab, have also shone in the IPL.

“Since the time more England players have started playing in the IPL, selectors have been taking note of performances in the league,” said Buttler.

“Through IPL, many players have got a chance to play in the England Test team. Coming here and playing in the biggest tournament in the world and winning against the best players in this high-pressure environment, you also gain a lot of confidence.” 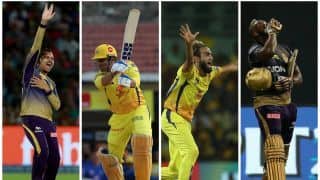