Hussey went on to say that Dhoni is a huge asset to any team, a brilliant player who can play to any situation of the game well.

Chennai Super Kings (CSK) have “moved on” from the controversy created due to an uncharacteristic outburst from Mahendra Singh Dhoni and will have no bearing during Sunday’s IPL encounter against KKR, batting coach Michael Hussey said Saturday.

During an IPL encounter against Rajasthan Royals, Dhoni lost his cool as he rushed into the field of play to confront umpire Ulhas Gandhe for backtracking on a no-ball signal. The former India captain was docked 50 percent of his match fees.

“It’s (incident) like having a loss. And again, you move on to the next match as quickly as you possibly can. So to be honest, we haven’t spoken about it. It’s been dealt with and we’ve moved on,” Hussey said on the eve of their return leg match in Kolkata.

“Yeah, it’s all happened and it’s been dealt with pretty much right after the game. And the game is finished and and that’s the thing about the IPL. You get to move on to the next match very quickly. There’s no point us dwelling on it. Worrying about and stressing about it, we’ve got to move on.” (ALSO READ: Dhoni deserves two-match ban for storming onto the pitch: Virender Sehwag)

Hussey went on to say that Dhoni is a huge asset to any team, a brilliant player who can play to any situation of the game well.

“So if he comes into the team’s in trouble, quite often you see him play slowly and just resurrect the innings, build a partnership, we’ve seen how dominant and how powerful that can be at the death as well. (ALSO READ: Dhoni has been a great leader and always ready to help: Tahir)

“So that that’s probably his value is that he can play a variety of roles. And he plays it very well with a calm head. So, so he’s a huge asset to any team that he plays for.”

Asked whether he could be the answer to the No 4 riddle in the upcoming World Cup, Hussey said: “I’m sure the Indian selectors will think about lots of different combinations along the way. But at the end of the day, I don’t think it really matters whether you bet 4, 5 or 6, I think he’s going to be a great asset to the team.”

Table leaders CSK are the team to beat this season with six wins out of seven matches, the latest coming against Rajasthan Royals when Santer sealed the game in the final ball with a six amind all the drama and controversy. (ALSO READ: After MS Dhoni meltdown, BCCI treasurer asks for umpires code of conduct)

“The lucky thing about the CSK batting order is that they are very experienced players. They know their own games very well. Quite a few of them have played here at the Eden Gardens on many occasions so they will know hat to expect and lets hope they can make the adjustments as quickly as possible. I’m expecting them to adjust pretty quickly,” he said.

Andre Russell in ominous form with the bat, Chennai Super Kings will have their strategies clear to stop the Jamaican.

“He is obviously in great touch at the moment. I just think every team is going to have some some clear plans against him. But I think you need to be really calm in the moment with him, very clear on where you want to try and ball and then execute that skill as best you can. (ALSO READ: Star players try to pressurise umpires but they have to withstand it: Krishna Hariharan)

“If he still is good enough to get it away, that’s okay then try and execute it again the next ball. not to complicate things too much keep things very simple but but the execution is probably the key.”

With 10 wickets from seven matches, seamer Deepak Chahar has been in exceptionally good form doing a fine job in the Powerplay overs.

Hussey said the 26-year-old’s ability to to swing the new ball with good control makes him a bankable bowler.

“You watch the slow motions, the seam position coming down, it’s in beautiful position so yeah, he’s been very accurate and can swing the new ball and that’s why he’s used in the in the in the first few over and he’s ability to pick up wickets in that power plays very important as well,” he hailed.

“In the last few matches, we have actually started using them at the death as well. And and I do see that continuing, maybe just one over towards the end. And it’s something that I know he really looks forward to.”

Giving a team update, Hussey said Dwayne Bravo is not fit yet.

“I am not hundred percent sure but he is well on his way to getting back from the hamstring injury, hoping he is back as soon as he can but I don’t think he is ready quite as yet.” 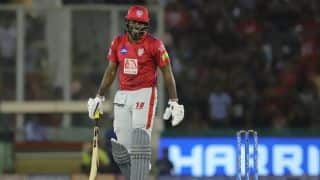