By beating RR by six wickets, Delhi Capitals have displaced CSK from the top spot.

A six-wicket win over Rajasthan Royals in Jaipur on Monday has taken Delhi Capitals to No 1 on the IPL 2019 points table.

In match 41 of the 12th season of the IPL, the Shreyas-Iyer led Capitals cruised to a target of 192 with four balls to spare after a blazing 54 from Shikhar Dhawan laid the platform for Rishabh Pant (78*) to guide his team home.

This is how the eight teams are placed as of April 23:

With this win, Delhi drew level with defending champions Chennai Super Kings on 14 points. But with a superior net run-rate (0.181) as compared to CSK (0.087), DC have taken the top spot.

This loss is Rajasthan s seventh in ten games this season, and they are all but eliminated from the IPL 2019 playoffs now.

On the Orange Cap table for most runs in IPL 2019, SRH opener David Warner remains on top with 517 runs. Dhawan, after his 54, has become the fourth batsman this season to cross 400 runs, and the first from Delhi Capitals.

On the Purple Cap table for most wickets in IPL 2019, DC strike bowler Kagiso Rabada remains at the top with 23 after he took two against RR. 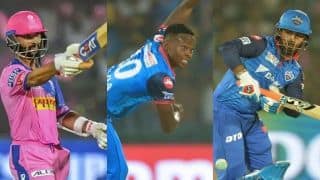