Smith, who was handed the captaincy reins hours before the match from the sacked Ajinkya Rahane, smashed 59 from 48 balls.

New captain Steve Smith celebrated his return to captaincy in sublime fashion smashing an unbeaten half-century to take Rajasthan Royals to a five-wicket victory over Mumbai Indians in the Indian Premier League (IPL 2019) on Saturday.

Smith, who was handed the captaincy reins hours before the match from the sacked Ajinkya Rahane, smashed 59 from 48 balls. The former Australian captain was well supported by 17-year-old Riyan Parag, who scored a brilliant 43 off just 29 deliveries as the duo s 77-run partnership for the fourth wicket laid the foundation for the run-chase.

I haven’t contributed as much as I would’ve liked through the tournament and it feels really nice to have gotten the boys over the line. Hopefully, we can carry it forward from here, Smith, who was dropped from RR s previous match, said at the post-match presentation ceremony.

Smith heaped praise on Parag, who missed out on becoming the IPL s youngest ever half-centurion.

Parag was really impressive; I have been watching him in the nets and with the bat looks like a seasoned campaigner. He’s a great kid and has a great future, I hope I was as confident when I was 17. When you are young and come into a team you have a carefree attitude and kept playing his shots, he said. (ALSO READ: Match highlights: Rajasthan Royals vs Mumbai Indians)

Smith also took up for Jofra Archer, who ended with exceptional figures of one for 22 in his four overs, but ended up dropping three catches in what was a disastrous day for him on the field.

It’s never good when you don’t take your catches, but Jofra pulled it back really well for us with the ball and was terrific, he said.

The win takes RR to the penultimate position with six points from three wins in their nine matches. The inaugural champions now have to win all their remaining five matches to stand a chance to qualify for the playoffs.

We just need to stay focussed on the processes, we just need to turn up and win. Every game’s a final, and we have to win each one. Let’s hope it turns out well for us, Smith said.

We can’t worry about others’ results, it’s just about us and our game. We showed a lot of courage to pull them back to 160 and executed our plans really well. 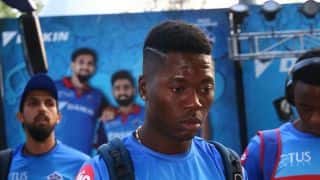