Dhoni with David Warner, Vijay Shankar, Sandeep Sharma and they were seen sharing some light moments.

Despite missing the game against Sunrisers Hyderabad (SRH) due to back spasm, Chennai Super Kings‘ (CSK) skipper Mahendra Singh Dhoni was seen involved in post-match activities with the Hyderabad boys after their six-wicket defeat in the Indian Premier League (IPL 2019) on Wednesday.

In recent times, Dhoni has been interacting with players of opposition teams once the match ends and again on Wednesday night, the CSK skipper was seen in a huddle with the SRH players.

He spent some time with David Warner, Vijay Shankar, Sandeep Sharma and they were seen sharing some light moments.

“#Thala at the epicentre of the huddle to discuss the #Yellove and much more about the game!,” the CSK Twitter handle posted late Wednesday night.

The defending champions were restricted to 132/5 after they opted to bat. Later, Hyderabad overhauled the target with 19 balls to spare, thanks to Warner and Jonny Bairstow who both cracked fifties.

Chennai will next play Royal Challengers Bangalore on April 21 before hosting Hyderabad in the return fixture at Chennai’s MA Chidambaram Stadium on April 23.

After Wednesday’s win, Hyderabad climbed up to fifth place in the league points table with four wins from eight games while Chennai still remain the table-toppers. 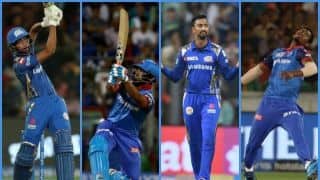