KKR squandered a bright start as the Kane Williamson-led SRH went on to register a nine-wicket win.

After Khaleel Ahmed s three restricted Kolkata Knight Riders (KKR) to 159/8, David Warner and Jonny Bairstow came to the party as Sunrisers Hyderabad (SRH) sealed a nine-wicket win in the 38th match of the Indian Premier League (IPL) 2019 at the Rajiv Gandhi International Stadium in Hyderabad on Sunday.

Chasing 160, the opening duo put up a 131-run stand in 12.2 overs and did not allow KKR any chance to make a match out of their 159-run total. The two were severe against the pace and the spin to set up an easy win for the home team.

While Warner, who is the current Orange Cap holder with 517 runs against his name, scored 67 before getting out to Yarra Prithviraj, Bairstow, who is now occupying the second spot in the list of the leading run-getters of IPL 2019 with 445 runs, remained unbeaten on 80 to seal SRH s win with five overs to spare.

Earlier, KKR s innings followed a boom, bust and flicker pattern as they scored 159/8 after put in to bat by Kane Williamson-led SRH. (IPL 2019, SRH vs KKR: AS IT HAPPENED)

KKR were off to a flying start as Sunil Narine, alongside Chris Lynn, went bonkers at the top. While Lynn did go big, it was the left-hander who was severe on the SRH bowlers. However, Khaleel Ahmed brought in some calm after a brisk start as he dismissed Narine and Shubman Gill in quick succession to stem the flow of runs.

Nitish Rana, KKR s highest run-getter in their previous game against Royal Challengers Bangalore (RCB), was the next man to get out as Bhuvneshwar Kumar struck in the eighth over. While KKR skipper Dinesh Karthik survived on the first ball he faced as Vijay Shankar missed a direct hit, he could not last long and got run-out in the ninth over, with Vijay putting in a fine effort in the field and KKR, from 42/0 in 2.3 overs were reduced to 73/4 in 8.2 overs.

Fortunately for KKR, Rinku Singh, who was brought into the playing XI, stitched a 51-run partnership with Lynn as the two rebuild the innings, with the Indian youngster scoring 30 off 25 balls. The partnership was broken in the 16th over when Sandeep Sharma dismissed Rinku.

Lynn meanwhile went on to register his ninth IPL fifty. However, he departed soon after as Khaleel scalped his third wicket of the evening. Lynn s fall put onus on Andre Russell as KKR seek a fighting total from where they can still eek out a win.

While the big-hitting West Indian took on Bhuvneshwar, his innings was cut short after he was dismissed for 15 by the Indian pacer. 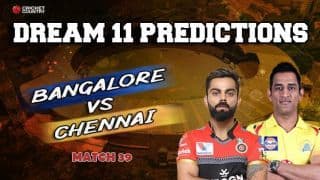 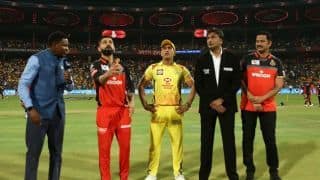