Languishing at the bottom of the table, Delhi Daredevils (DD) need a miracle of sorts to make the knock-outs and leg-spinner Imran Tahir, who is set to make his Indian Premier League (IPL) debut, is hoping to use his experience of playing on sub-continent wickets to get the team out of doldrums. Delhi need to win all their remaining six matches to be in contention for the IPL 7 play-offs.

South African Tahir, who has been drafted in the side for injured paceman Nathan Coulter-Nile, was the highest wicket-taker in the ICC World T20 2014 in Bangladesh. “Wickets are looking the same, even in Bangladesh there were no spin-friendly wickets. I have that experience and it would help,” Tahir told reporters after the team’s practice session.

“Spinners have a main role whether in IPL or world cricket. But it’s hard to be a leg-spinner, you have to be accurate. It’s difficult to perform for a leg-spinner than a finger spinner or a left-arm spinner. Kotla wicket suits spinners, I will try to do something special,” he added.

Asked about the Daredevils’ inexplicable poor show, Tahir said, “I know the team is not doing well. I want to do something for the team. They are working hard, just things are not going their way. But you can’t do much into it. Destiny too has a role to play in it. If even if we can win four out of six games, we will be able to justify.”

The Pakistan-born cricketer has been a journeyman, having played in umpteenth number of teams, including his national side. “Performance has always been the goal. We are not here for holidaying. I can speak Hindi and English also, so have mixed up with the guys easily. I have done the job for 24 teams, so hopefully, I can do it for the 25th team as well.”

Tahir said he was comfortable bowling after the power-play overs but if asked, he would try to perform well in first six overs. “I have not bowled in power-play but if captain asks me then it has to be considered in the interest of the team. I would like to put myself in that situation. If not, then I would like to bowl after six overs.”

Tahir has many South African teammates such as JP Duminy, Wayne Parnell and Quinton de Kock in the Daredevils squad and the spinner says it indeed was a comforting factor. “It is an advantage,. They know how I play and they also know what they can to do help me as I am new in the side. I have also played against some of the Indians in England.”

Tahir recently got the chance to speak to Shane Warne. Tahir said he got valuable tips from the legendary Australian spinner. “He came to help me in England and I appreciate. Normally I approach Abdul Kadir since I share a similar bowling style with him. Warne advised I should not change anything. It is also a help since sometimes spinners come to you and advise you to bring in changes like how to grip or bowl from seam.

“What Warne has contributed that he told me about the mental aspect of the game, like even if you are not bowling well, you should not show it to the batsman. So that helped a lot,” he added. 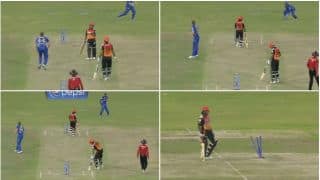