Although James Anderson warned not to get carried by by Tobey Roland-Jones' early success, he has backed him for settling down in the team quite soon.

Following his successful debut in the third Test against South Africa, England fast bowler James Anderson has backed Toby Roland-Jones to come in handy in the upcoming Ashes to be held Down Under in late 2017. Roland-Jones had a memorable debut, when he claimed five for just 57, while South Africa were bundled for mere 175 in the first innings. Although Anderson warned not to get carried by by Roland-Jones’ early success, he has backed him for settling down in the team quite soon. Anderson stated that he was pretty impressed to see the young fast bowler settle so fast in the side, as it not often some bowler does so. FULL CRICKET SCORECARD: England vs South Africa 2017 – 3rd Test at The Oval

“I was very impressed. It’s not often you see a debutant settle as quickly as he did, and it was brilliant to see. He looked very comfortable and very confident. He knows his action, knows his game very well. It’s a perfect pitch for him. He’s a very intelligent cricketer and he thoroughly deserved his five wickets. He could definitely [succeed in Australia]. He gets bounce, he can swing the ball, seam it, so he’s got all the attributes. But he’s only one game in, so we’ll just take things one step at a time,” said Anderson, as reported by Sky Sports. Shane Warne: Toby Roland-Jones will do well in The Ashes

Anderson also spoke on the performance of opener Keaton Jennings. “He’s been pretty good. Sometimes you do see it in people when they go through a bad trot, you can see them struggling in and around the group. But he has dealt with it very well. Obviously, it’s been frustrating for him, but seeing how he and Tom Westley got through that tricky period today, that might be what he needs to kick-start a good run of form,” he said. Toby Roland-Jones: Every kid dreams of this moment

“We came under a lot of scrutiny after the Trent Bridge Test and I think the guys wanted to go out and show what we’re made of. We want to try to develop into a great side and great sides don’t win one, lose one, win one, lose one. We need to stop that sequence if we can,” he concluded. 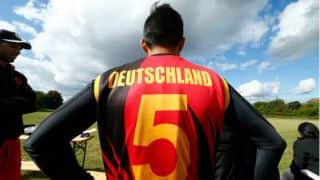