West Indies register a thrilling 4-wicket win over Pakistan, and draw first blood in the first of the three-match ODI series, at Guyana.

Jason Mohammed struck a brilliant unbeaten 91 to power West Indies to a historic 4-wicket win over Pakistan in the first ODI. For the first time in history, West Indies chased down a target in excess of 300 and took a 1-0 lead against Pakistan to draw first blood in the first of the three-match One-Day International (ODI) series, at the Providence Stadium in Guyana on Friday. Apart from Mohammed, it was Kieran Powell, who scored a prolific 61 which also assisted West Indies to chase down the challenging total successfully. For Pakistan, Mohammad Aamer and Shadab Khan were the pick among the bowlers. FULL CRICKET SCORECARD: Pakistan vs West Indies 2017, 1st ODI at Guyana

Earlier, West Indies skipper Jason Holder won the coin toss, and elected to bowl first. Pakistan posted a challenging total of 308 for 5 in the allotted 50 overs courtesy of three half-centuries, respectively from Ahmed Shehzad, Mohammad Hafeez and Shoaib Malik. For the home side, Ashley Nurse claimed 4 for 62. In their chase, West Indies openers Evin Lewis and Chadwick Walton were off to a shaky start. With just 23 runs on the board, it was Walton who fell for a mere 7 to Mohammad Aamer in the fifth over. Nevertheless, Wet Indies were revived by a steady second-wicket stand of 68 runs between Lewis and Kieran Powell.Lewis fell short of his half-century and was dismissed for 47 off Hafeez in the 22nd over. Meanwhile, Powell scored his half-century, and he consolidated West Indies position with another healthy 65-run stand with Shai Hope. However, it was at the score of 156, when Powell was dismissed for 61 by Wahab Riaz in the 33rd over.

West Indies were dealt another blow as Hope was dismissed right after, for 24 to Shadab Khan, becoming his maiden ODI wicket. This was when Mohammed got into the act, adding 70 runs with Jonathan Carter. Carer fell for a mere 14 at the score of 228 in the 42nd over. However, Mohammed had already begun taking attack to the opposition, as he quickly brought up his half-century in just 30 deliveries. FULL CRICKET UPDATES: Pakistan vs West Indies 2017, 1st ODI at Guyana

Holder fell for 11 to Shadab in the 45th over. Nevertheless, the pair of Mohammed and Nurse was enough to see West Indies home, as they comfortably steered their side towards a 4-wicket win with one over to spare.

Mohammed was also adjudged Man of the Match for his match-winning knock of 91, which came off just 58 balls, studded with 11 boundaries and 3 sixes. Nurse was belligerent in his effort as well, cracking 5 boundaries and 1 six to score a quick 15-ball 34. Mohammed’s unbeaten 91 steers WI to a thrilling 4-wicket win over PAK in 1st ODI

Man of the Match: Jason Mohammed 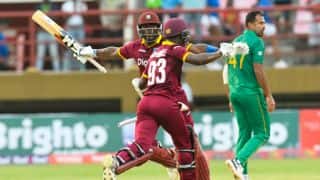