India failed to progress past the round-robin stages in the Emerging Teams Asia Cup last year.

The Board of Control for Cricket in India s (BCCI) junior selection committee on Sunday named allrounder Jayant Yadav for the upcoming Emerging Teams Asia Cup that will be held in Sri Lanka from December 2 to 17 this year.

The 28-year-old Yadav, who has played four Tests and an ODI, last represented India in the first of the four-Test series against Australia at Pune in February last year before he lost his place in the side. Yadav is currently playing for Haryana in the ongoing Ranji Trophy 2018-19 season.

India failed to progress past the round-robin stages in the Emerging Teams Asia Cup last year and will look to improve on their dismal show. 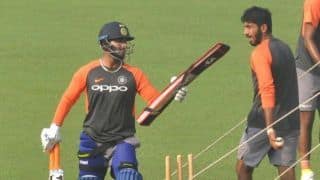 India vs West Indies 2018, 1st T20I, LIVE Streaming: Teams, Time in IST and where to watch on TV and Online in India Jonny Bairstow out of 1st Test against Sri Lanka