The Test opener's feet are firmly on the ground and he’s not taking anything for granted.

Joe Burns knows his place at the top of Australia‘s Test batting order is not guaranteed, but after scoring 180 in his previous match and with a string of success against the red-ball in Sheffield Shield cricket, the opener is ready for the Ashes is called up for this summer’s tour of England.

Burns, 29, was recalled to the Test team in January after the Australian selectors dumped Aaron Finch. He made 15 in the huge win over Sri Lanka in Brisbane and then 180 and 9 in Canberra as Australia swept the series. (READ MORE: Burns, Head end Australia’s 113-day century drought)

That 180 is the fourth of Burns’ fourth of Test career and came three years after his third. After being overlooked for the 2016 tour of Sri Lanka, Burns was recalled, twice, on separate occasions at home and away for a single Test against South Africa. After being pushed to the sidelines again for two successive series against Pakistan and India, he returned to face Sri Lanka after success for Queensland.

With David Warner‘s ban ending on March 29, Burns is aware that one opener’s slot may be vacated to accommodate the former vice-captain.

“Obviously there’s one eye on that Ashes series and trying to be the best prepared as I can,” he told cricket.com.au. “You can’t control selection, but I can control my preparation for England and trying to make as many runs as I can in those conditions. “We’re really fortunate that we use the Dukes ball (in the Sheffield Shield) and then county cricket – it allows me to be really consistent with my preparation now.

“It’s one of the luxuries that you don’t often get as a player where you can invest six months of basically the same training every day. There’s no chopping and changing formats, it’s the same role I’m going to execute as an opening batter against the Dukes ball.”

Burns’ opening partner in both Tests versus Sri Lanka was the rookie Marcus Harris, who debuted in December against Australia. After six Tests, Harris averages 32.70 with two fifties. Should Warner return to Australia’s team for the Ashes in England after the World Cup, one of Burns and Harris will have to make way.

Burns has signed for Lancashire for the 2019 county season, and will be available for 10 matches. That stint, he hopes, will be beneficial ahead of the Ashes as he plays alongside James Anderson at Old Trafford – venue for the fourth Test between England and Australia.

“As a batter you certainly get more from facing the bowler in the nets than they get from bowling at you,” said Burns. “We’ll have to wait and see if I get the opportunity to face up to him (in the Ashes). I’ve actually never played against Jimmy, hopefully that exposure leaves me in good stead. He’s obviously going to play a huge role in the Ashes series.” 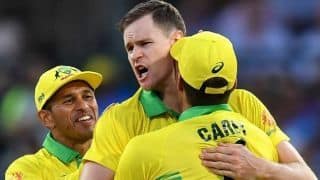