Jonny Bairstow will be playing in his first match of the ongoing England's tour of Sri Lanka since he picked up an ankle injury midway through a five-match ODI series.

Jonny Bairstow will be playing in his first match of the ongoing England’s tour of Sri Lanka since he picked up an ankle injury midway through a five-match ODI series. The wicketkeeper-batsman will take the place of Sam Curran in the playing XI for the third and final Test of the series to be played in Colombo.

ALSO READ: Broad back, Anderson out for SSC Test

Though Bairstow had recovered in time to be considered for the second Test, his replacement Ben Foakes had made a memorable debut to keep his place.

Bairstow watched from the sidelines as England went on to clinch the series by winning the first two Tests. However, a minor side issues has ruled out Curran for the final match of the tour paving the way for Bairstow’s return who will bat in at the No. 3 spot.

Apart from that, England have also rested James Anderson, their most successful bowler in Test cricket, from the third Test. Stuart Broad, who missed the first two Tests, takes his place in the side.

“I understand the reasoning behind it with the series already won. With the winter we’ve got ahead, it makes sense for Stuart to get some cricket. He’s not played for a while and it’s going to be a tough tour of the West Indies. It’s a good opportunity for him and the team. You have to look at the situation as well – it’s hard work for seamers here and it’s not like I’ve been able to have a huge input on the games,” Anderson said on Wednesday.

The third Test gets underway from Friday. 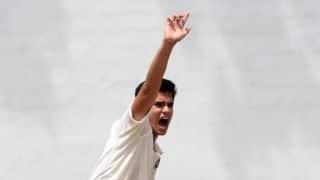