Duminy and Jadhav were batting well for DD.

Yuzvendra Chahal bowled the 15th over for Royal Challengers Bangalore against Delhi Daredevils in their Indian Premier League (IPL) 2014 match. He started very well to Kedar Jadhav, going for just a single off the first two balls. JP Duminy, who had played Chahal particularly well till then, got just a single off the next ball. Another single to Jadhav was followed by a six off the final delivery of Chahal’s spell.

Yuvraj Singh was brought on for his third over. He started well, going for just a single. After the batsmen treated him with due respect, taking just four off the first four deliveries, Duminy managed to score a boundary off his bowling. Yuvraj followed up well with a dot ball to end with.

Muttiah Muralitharan bowled the 13th over, and was rewarded almost immediately as JP Duminy was nearly cleaned up while sweeping. After conceding just five runs in the over, Dinesh Karthik tried to go for a big hit only to be caught easily in the deep by Yuzvendra Chahal.

Earlier, Yuzvendra Chahal bowled the 12th over for Royal Challengers Bangalore against Delhi Daredevils. JP Duminy greeted him with a big six down long on. He got a single off the next ball to put Kevin Pietersen on strike. He took a couple of runs before Duminy hit another six over midwicket. Chahal was guilty of bowling far too short to both batsmen, but Duminy especially was very severe. Chahal got rid of Pietersen  in the over.

Muttiah Muralitharan came on to bowl at Kevin Pietersen and JP Duminy in the 11th over of the innings. Murali was getting appreciable turn and nearly outfoxed Pietersen off the very first delivery. He was worked around by the batsmen for six runs off the over, as Pietersen tried and failed to pull off a switch hit.

Abu Nechim came on to bowl the 10th over of the innings. He finally broke a threatening partnership between Mayank Agarwal and Kevin Pietersen when he had Mayank caught in the deep by Sachin Rana. JP Duminy was the new man in for DD. Nechim was bowling well, and got a bit of movement off the pitch.

Earlier, while Bangalore were batting, Yuvraj Singh played big sixes off Imran Tahir, the leg-spinner. He even picked his googly to smash him for a six. He helped Bangalore to collect 27 runs of the final over. He was at his willowy best in the end overs and that helped Bangalore to end up with 186 for four of their allotted 20 overs. 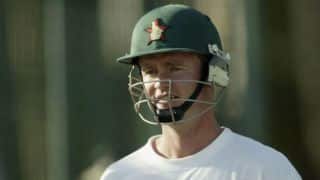 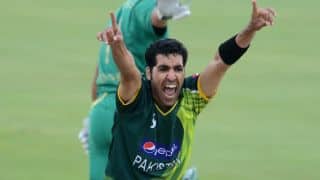