Kedar Jadhav was not picked because of his injury prone past: MSK Prasad
By CricketCountry Staff

Kedar Jadhav was stumped when he was left out of the squad announced on Thursday for the remaining three ODIs against the West Indies despite regaining match fitness.

“I passed all the tests and came here match fit. Obviously, it hurts when you are in form and get injured. It creates uncertainty on when you will get the next opportunity. And, when you make a comeback, you have to start from scratch again as you end up missing a lot of matches. It hurts but you have to accept it and move on,” Jadhav, who was drafted into the India A side said after the Deodhar Trophy 2018-19 match against India C at the Feroz Shah Kotla on Thursday.

Jadhav picked up a hamstring injury during the final of the 2018 Asia Cup last month. After being declared match fit, he played for India A on Thursday and scored a 25-ball 41, besides bowling five overs in front of the three selectors present at the venue.

However, chairman of the selection committee MSK Prasad feels Jadhav was not picked due to his fitness issues in the past.

“We did not pick Kedar because of his history of fitness. There have been occasions earlier when he has come back fit and then broke down, a case in point being the Asia Cup last month,” Prasad said on Thursday.

“We were thinking that if India A won today, then Kedar would have got another match, which would have given us a fair assessment of his match fitness. We could have added him as an additional player [in the Indian team] before the fourth ODI as the Deodhar final is on Saturday. Players need to understand that there is a process that we follow while selecting the team.

Jadhav has been the third player after Karun Nair and Murali Vijay, who has openly voiced out that no communication was made to him before dropping him from the team. 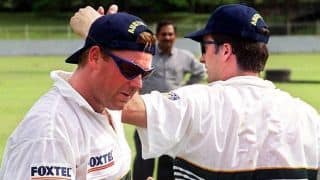